On Wednesday, May 13, 2009, the APU Wind Orchestra gave a Welcome Concert for the new entrants at the Student Hall on the 2nd floor of the APU Cafeteria. 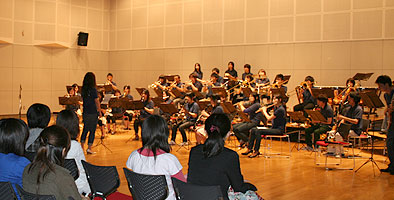 The APU Wind Orchestra played a range of pieces including "Deep Purple Medley", "Sazae San a la carte", "Nihon no Mikata (Yajima Byoushitsu)" and "I need to be in Love (The Carpenters)". At the end of each performance, they explained the songs to the audience and especially the international students who were not familiar with the Japanese songs.

Through this concert, the audience made up of new entrant and current APU students, APU staff and high school students were able to know learn a great deal about this circle. The audiences were impressed with their very professional performance which illustrated just how much practice they had put in.

The APU Wind Orchestra is expanding its field of activity by participating in both on and off-campus concerts and events such as the Tenku Campus Festival and the Annual Concerts. They also gave a mini-concert at the JR Beppu Station and at the opening events of the Beppu Bay Service Area. 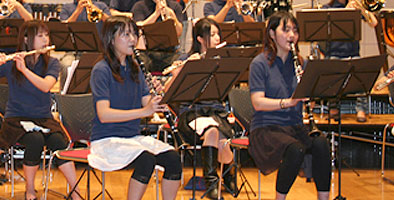