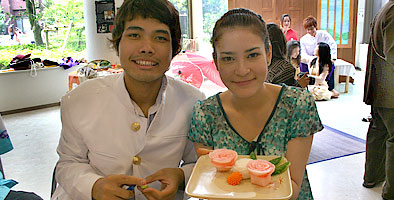 Every year at APU where students from 87 countries and regions come together, we hold Multicultural Weeks to introduce and throw the spotlight on the culture and languages of these countries and regions. Under the theme of Culture, Tourism and Festivals, posters of famous Thai tourist spots will be put up in the Cafeteria and ample Thai food will be available.

In addition to displays of Thai silk and traditional costumes, vegetable carving and beautifully decorated desserts, you will also be able to try on Thai clothes and enjoy free black and herb tea tastings at a both set up in the Cafeteria. Friday, July 17, members will be adorning Thai traditional folk costumes and performing traditional music and dance at the final event of Thai Week –the Grand Performance.

There are currently 257 Thai students studying at APU (as of May 1, 2009). Furthermore, the Language Center has been set up and is engaging in the teaching of Thai as one of the languages of the Asia Pacific region (AP Language). 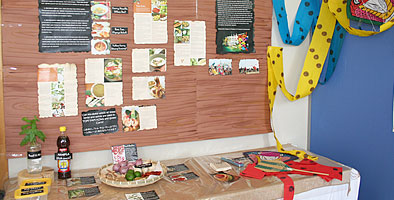