On the day of the concert the 82 members of the Ritsumeikan Symphony Orchestra and 3 soloists from APU will perform a concerto. Added to this line up will be performances from 10 students selected at the auditions for this concert and the gospel circle Soul (comprising of 11 members). Spotlight interviewed 3 APU students who will be performing and asked them how they felt leading up to the concert. 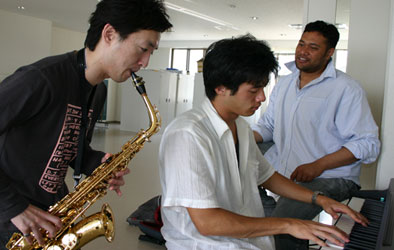 ASANO Taiki (APS 4th year)
Instrument: saxophone
I think this concert will present the opportunity for the audience to listen to music in a chronological fashion from the classics to the modern. This will not only be the first time I will perform with the Ritsumeikan Symphony Orchestra, but also the first time I will be involved in a concert on a scale of this size. I hope that students and members of the local community from all walks of life will warm to this performance. Furthermore I will be most pleased if this concert serves as an inspiration to other circles, and gives birth to the creation of a new culture at APU.

NOMURA Keisuke (APS 4th year)
Instrument: piano
Music is a part of my life which I would like to express in my own way. I think what is important is not how you relate the music but how it comes across. With this thought in mind, and with my motto: "A cool head and a fiery soul", I hope to give it my all at the concert.

FUNAKI Kaituu I Pangai (GSM 2nd year; Kingdom of Tonga)
Tenor
I have held back from graduating in the fall of this year so I can have this last chance to sing at a concert of this magnitude. Also, as a student who has been here since APU's inauguration, it gives me great pleasure to be able to contribute to the 5th inaugural anniversary of APU. I have been involved in student bands in the past but this is the first time I will be performing in an orchestra. I hope my voice will not be drowned out by the multitude of musicians on stage.

The concert will commence at 18:30 (doors open at 18:00). On the following day (Saturday 9 July), in order to further strengthen ties with the local community a special concert: the APU-RU Concert in Kamegawa will also be held. We are eagerly awaiting your attendance at these events. 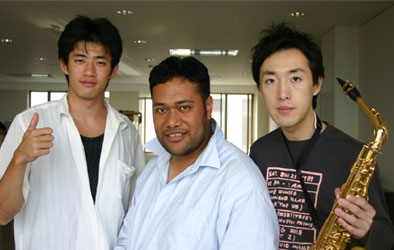