On Monday, October 11, 2009, "Habitat APU", a student circle involved in the construction and renovation of houses for people in desperate need of a home, held an exhibition of the activities in Oita City. On display at the exhibition were pictures of "Global Village Work Camp 2009" – a volunteer construction program they carried out in Indonesia last summer, and photos of their "Picture Book Project" – an independent project which involves the translation of Japanese picture books into local languages to be read to local children. This was in addition to an introduction of the Habitat program. 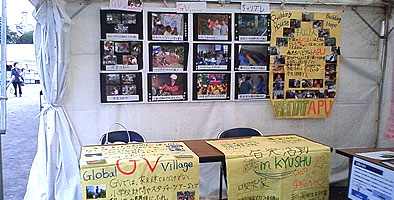 APU Habitat was set up in 2006 as a branch of the Habitat for Humanity Japan (HFHJ) – a member of Habitat for Humanity International (HFHI). HFHI is a non-government organisation involved in the construction and renovation of dwellings for people of many different backgrounds all around the world. Currently with fifty three members, the circle has been involved in volunteer construction activities in the Philippines and Thailand, and had also given reporting sessions, photo exhibitions, and more, both on and off campus.

During the exhibition, Habitat APU introduced their "Global Village Work Camp" – a work-camp program hosted by HFHJ in which members twice a year engage in the construction of dwellings in nations where HFHI is currently active.

This year, they centered their activities on the Indonesian Island of Java. The seventeen participating members were involved in the construction of six houses. They also learnt about the current state of Indonesia through carrying out their "Picture Book Project" at a local primary school where they read aloud their stories in Indonesian, donated twelve picture books, and observed local slums and primary schools through the cooperation of the Indonesian Education Promotion Foundation. 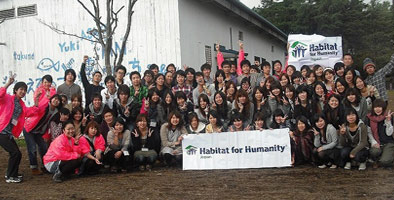