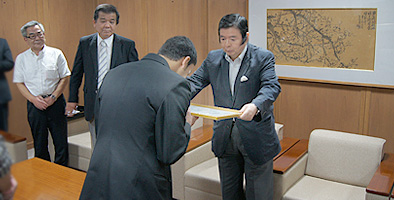 Prof. KIM expressed his gratitude to the Oita Godo Shimbun and said, "This was a very unique project featuring articles in both English and Japanese and it is a great honor for the university and our students to be involved in this project". In response, President NAGANO thanked the students and staff for their efforts and replied, "This joint-project has received great attention in our industry. APU students enjoy an excellent reputation and we hope to continue this relationship with APU in the future".

Accepting the certificate on behalf of APU, Joshi Ratala Dinesh Prasad (APS3, Nepal) gave his impressions of the experience, "For me personally as a member of the APU Times, it is a great honor to receive this recognition from the Oita Godo Shimbun and this experience has encouraged me to write more and pursue my career in the journalism industry".

*The "APU PRESS" 10th Anniversary Special Feature:
Compiled through the collaboration the Oita Godo Shimbun and a team of student, two editions of the APU 10th Anniversary Special Feature were printed in May and July, 2010. Articles were written and translated by APU students and staff on a range of topics including AP House, the careers of APU graduates, and the recent special lecture by Nobel Peace Prize Laureate, Dr. Muhammad Yunus. Entitled "APU PRESS", this four-page full-colour feature was printed in both English and Japanese and circulated to approximately 230,000 households throughout Oita Prefecture. 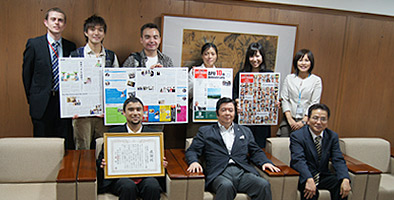