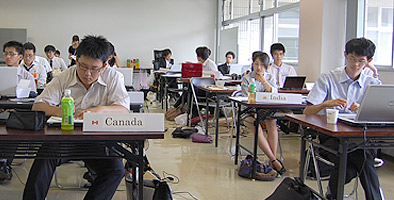 The Japan Model United Nations Association has branches throughout Japan and, in addition to the Kansai, Hokuriku and All-Japan sessions, the Kyushu Summer Session is one of the association's four major meetings. Held every August, participants in the Kyushu Summer Session consist primarily of students from APU and The University of Kitakyushu. This year thirty-one students took part in the event from universities and graduate schools around Japan including Kyoto University, Tohoku University, and the Tokyo University of Foreign Studies.

Participants in this model UN conference assumed the roles of ambassadors and discussed the administration of Jerusalem and its many complex religious, ethnic, and political issues. The participants were divided into three groups: an Israel-America group, Arab-Palestinian group and, taking a neutral position, an EU group. The talks got underway with each ambassador aware of the latest international developments and keen to ensure their nation's interests. Although at the conclusion of the three-day talks the stand-off between the Arab and Israeli groups remained unresolved, the conference resulted in the adoption of a motion proposed by the American delegation and a proposal put forward by the Arab-group.

In addition to the four-day conference, participants also took part in exchange and recreation events and established new friendships with peers from other universities. On the fourth and final day of the event, each participant offered their feedback on the program and discussed in groups any doubts they had the conference, shared their thoughts, and came up with ways to solve any issues.

Looking back on the event, Secretary General and person in charge of the program, NAKAMA Sachie (APM3, Japan), commented that, "the process of working together and managing staff in the preparations leading up to the event has developed my leadership skills and my ability to make decisions with an understanding of the big-picture. I hope that students will make the most of this experience and make this event even better next year".

About the Model United Nations:
Originating in Harvard University in 1923, the Model UN movement began in Japan in 1983 through the efforts of Ms. OGATA Sadako a former Professor at Sophia University. The Model UN currently has over 400 members throughout Japan actively involved in the organization's activities. Members assume the role of delegates from UN member states and simulate UN meetings following actual UN meeting procedures. Through this process, students are able to experience first-hand how UN resolutions are reached. 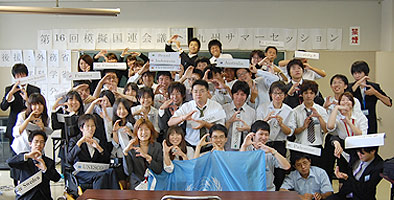