We offer our sincere thanks to everyone who gave their generous support to Heart 4 Japan.
APU-NEST student members also offer their thanks to those who contributed to the donation appeal and have prepared the following report on the project.

Appreciation and report of Heart for Japan

Heart for Japan was an event initiated by a group of students who wanted to express their gratitude to Japan – a country that has become a second homeland to every international student at APU. Feeling powerless at not being able to go the disaster area directly, we arranged a group of musical performances throughout the week during which we raised funds and gave out Indonesian bracelet to everyone who contributed.
We offer our sincere thanks to everyone who supported our disaster relief efforts.

The details of the event are as follows.

-Mini concert
Time: Between 2-3 periods and between 3-4 periods
Location: in front of the fountain 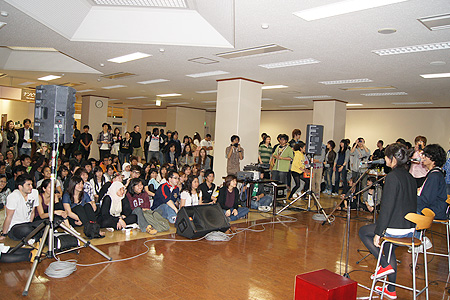