On Tuesday, July 5, 2011, First Secretary at the Embassy of Israel in Japan, Ms. Michal TAL visited APU and delivered a Social Outreach Seminar under the title of “Israel’s Multiculturalism: Current Situation and Problems”. This lecture was held as part of the “Multiculturalism and Society” undergraduate paper taught by APS Assistant Professor KIKKAWA Takuro. 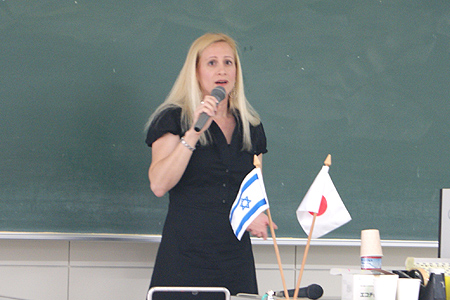 Ms. TAL began by describing her role at the Embassy to present a more positive image of the Israeli nation and culture – in contrast to the negative images of terrorism and domestic unrest that typically come to mind when people think about Israel. She then showed a short promotional video illustrating the multicultural nature of Israel and how foreign culture has influenced Israeli food, music and contemporary Israeli society.

Ms. TAL then described Israeli immigration policy and the steps taken to ensure that new immigrants adjust to their new lives. In addition to financial and social support provided to new immigrants from the moment they arrive in their new country, she described how the Ministry of Immigration and Absorption works to ensure immigrants are not re-settled in isolation but rather as members of communities of similar cultural backgrounds. She also described the “Ulpan” language schools that have helped immigrants learn Hebrew – an official language of Israel in addition to Arabic.

Israel, she described, is “a land of cultural fusion and confusion” which often leads to problems and complications. However, by sharing a common religion and drawing on the support of the State, she described how differences can be overcome.

Audience members raised a range of questions including how the government deals with immigration problems, the resurgence of right-wing politics in parts of Europe, and how Japan should go about adapting a more open immigration policy. In response, Ms. TAL suggested that institutions such as APU are exemplars of how language and other immigration barriers can be overcome and expressed her hope that more institutions around Japan would follow suit. 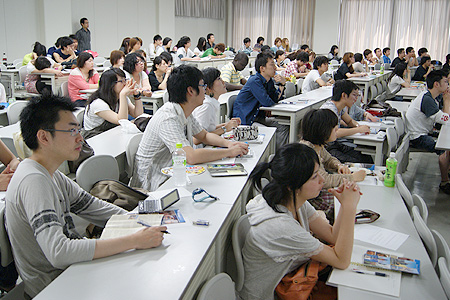