On Friday, February 7, 2014, APU concluded a general agreement with the Yangon Institute of Economics (YIE), a national university in Myanmar. The agreement aims to promote faculty and student exchange, encourage joint research, and contribute to mutual understanding and economic cooperation between Japan and Myanmar. 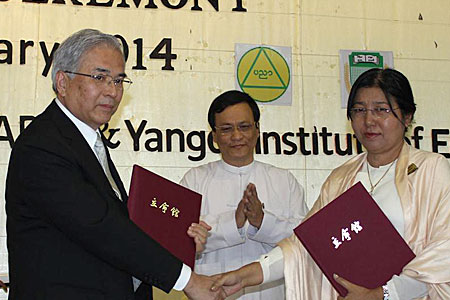 In the evening, a reception was held to commemorate the conclusion of the agreement, and several public officials, including Yangon Mayor U Hla Myint, the former Myanmarese Ambassador to Japan and a member of the APU Advisory Committee*, and Mr. Maruyama Ichiro, Minister-Counselor of the Embassy of Japan in Myanmar, were in attendance. 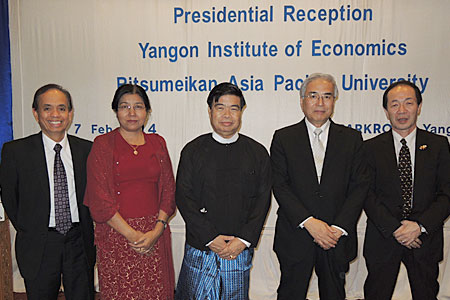 There are currently 24 Myanmarese students studying at APU, and over 150 of their fellow countrymen and women have studied at APU to date. APU has also been working to develop relations with Myanmar. The Myanmar Chapter of the Alumni Association was established in February 2013, and President Korenaga visited the country last May as a member of an economic mission led by Prime Minister Abe.
This agreement is a promising step toward stronger cooperative ties not only between APU and YIE, but also between Japan and Myanmar.

* The Advisory Committee
Established before the university opened, the Advisory Committee aims to provide multifaceted support to the University and currently has 302 members (as of July 2013) including former heads of state of nations around the world, ambassadors, and leading figures in the Japanese business and economic circles. The Committee continues to make a range of contributions to the development and enrichment of study and research at APU.