On Wednesday, January 7, 2015, an open screening for The ANDO Momofuku Honor Prize was held.
This prize consists of a scholarship that was established courtesy of the late Dr. Momofuku Ando, founder of Nissin Food Products Co., Ltd. and honorary doctor. It is intended to encourage scheduled graduates of undergraduate programs at APU who have set ambitious post-graduate career goals and seek to achieve major contributions in the Asia-Pacific region. In addition to one million yen in prize money, recipients of this prize are granted the honor of speaking at the podium at their APU graduation ceremony on behalf of the undergraduate student body.

In this open screening, out of the fifteen students who passed the document screening, four went on to pass the initial selection stage following a rigorous examination process. Those four students conducted a presentation on what they engaged in over the course of their university years and what their future dreams were, after which they fielded questions. Those students, in the order of who presented, were: KAJIO Takeshi (APM 4, Japan), ASANO Kenshi (APS 4, Japan), MOHAMED Ikram Mohamed Ihthisham (“Shamu”) (APM 4, Democratic Socialist Republic of Sri Lanka) and BAEK Go Eun (APS 4, South Korea). Amid tense proceedings that were also attended by faculty members and current APU students, these four students took on the challenge of conducting a seven-minute presentation followed by an eighteen-minute Q&A session in both Japanese and English. 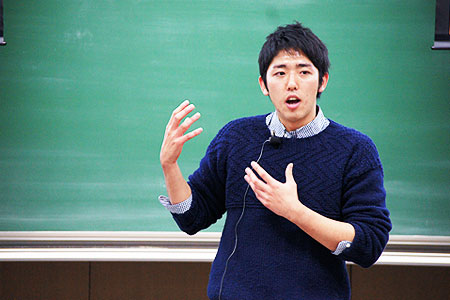 KAJIO commented that he “wants to bring about a society in which people can take pride in their work and challenge new things,” and spoke of how he wants to go on to create a brand originating from Asia for that purpose. 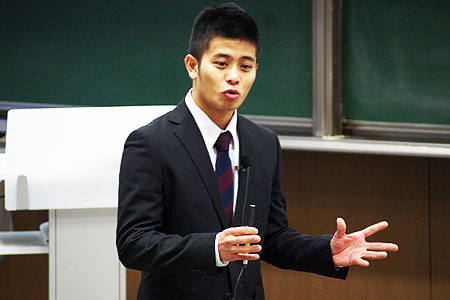 ASANO spoke largely of a plan for a “project to connect others” to be implemented in Rwanda, his site of dispatch as a member of the Japan Overseas Cooperation Volunteers (JOCV). Through this project, Skype and other SNS would be used for children all over the world to communicate with each other. 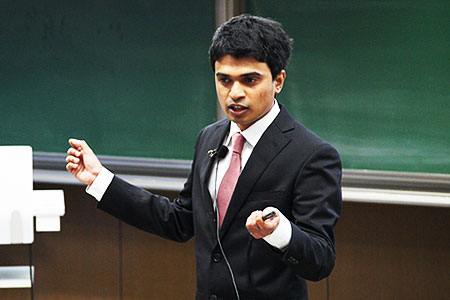 Shamu spoke largely of how he would act upon the conviction he gained through the various subjects he learned and experiences he accumulated at APU to build schools in poor Sri Lankan regions and become a professor of accounting management so that he can share his academic takeaways and experience. 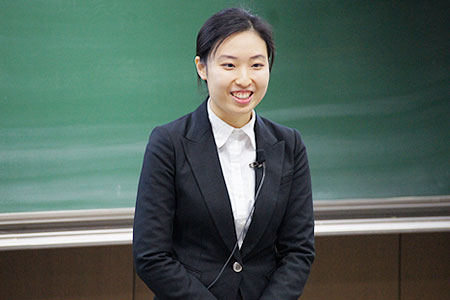 Go Eun spoke largely of how she overcame her prior personal limitations to aggressively take on new challenges over time, how that helped her tackle things with greater autonomy, and how she would like to go on to contribute to society through her future work.

In the Q&A session that followed the students’ presentations, a variety of questions were posed by the ANDO Momofuku Honor Prize panelists, including “Wouldn’t you need something more concrete to make that a reality?”, “How will you leverage what you learned at APU going forward?”, “What is the theme of your thesis and how does it link to your future goals?”, and “Why did you apply to receive this prize and what value do you have that would substantiate your being chosen to receive it?” The four students took on these tough yet tender panelist questions with an earnest attitude, and answered them with unbridled sincerity while making full use of the language ability in their possession.