As part of the APU Alumni Association10th Anniversary Grand Finale held on Saturday, November 1, 2014, about 80 students and alumni from 50 countries and regions joined an event called Green Challenge, which was an attempt to set a world record for the most nationalities represented in a game of tug-of-war. A Guinness Book of World Records official was on hand to certify the record. 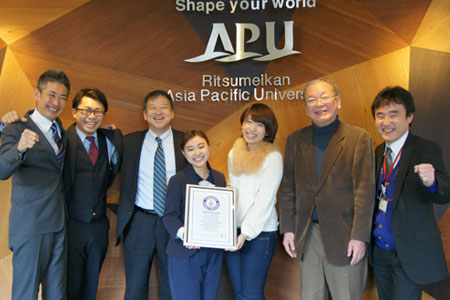 On Saturday, January 31, 2015, APU Alumni Association members OKADA Yoshinobu (March 2006 APS graduate) and MAEHARA Hironobu (March 2011 APS graduate) and event organizing committee members NAKAMURA Kotona (APS1, Japan) and NAKANISHI Chihiro (APM1, Japan) met with Vice President YAMAGAMI Susumu to donate the Guinness World Record certificate to the university.
During a brief chat with the vice president, the alumni and students told him how each event participant's passport had to be carefully checked and how they struggled to round up students to cover for those who suddenly cancelled on the day of the event. They also mentioned the outpouring of support they received from the local community in their world record bid.

The donated certificate will be put on display in the Administration Building.