On Sunday, January 24, 2016, APU held the final report session for the "Global Collaborative University Education (GLUE) Program - From Pre-Enrollment to University Liberal Arts and Specialized Subjects"*1, which is administered together with St. Edward's University (SEU) of the US as part of the "Re-Inventing Japan Project". This program was selected in FY2011 as a subsidized program by the Ministry of Education, Culture, Sports, Science and Technology, and FY2015 was the final year.
Approximately forty people attended the event, including the students, faculty and staff involved in the program as well as officials from domestic universities, companies, and Oita City*2. 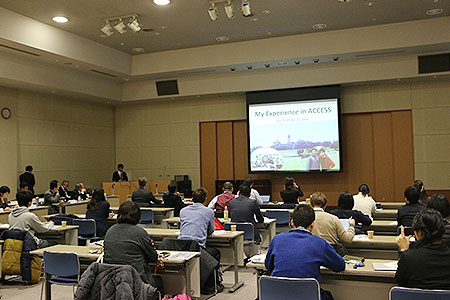 During the report session, the faculty members in charge of each program discussed reports from the students and graduates who actually participated in the programs as well as the transitions and achievements of each of the outbound and inbound programs. While there were issues regarding how to handle the challenges of jointly operating a program which brings together students from both universities which have different rules and ways of thinking, the reports covered the achievements over the past five years including the use of tools such as rubrics*3 and E-portfolios*4, the assessment (evaluation) methods jointly developed with SEU, and the utilization of peer learning*5 systems whereby program students mutually support each other. In addition, the impact of the GLUE program on SEU was also discussed, including the contributions to the City of Austin and the growth of SEU students involved as program buddies.
The reports from the students and graduates who participated in each of the programs highlighted how the programs deepened their understanding of themselves and others as they learned about themselves and also developed their skills for later careers. 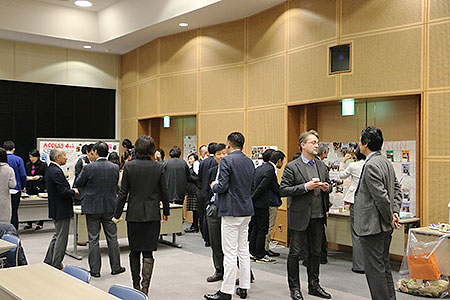 Panels introducing each of the programs were created by the student participants in the GLUE program and exhibited in the meeting hall. Participants and students enjoyed a lively exchange of opinions at the social gathering held after the conclusion of the report session.

*1: For more details, please refer to the APU gallery.
*2: Oita City and the City of Austin, Texas where SEU is located are sister cities.
*3: Chart which shows the evaluation criteria for measuring academic achievement
*4: Initiative to continuously record the academic process, results, and historical data to visualize and share student growth
*5: Practical learning activity where students cooperate and learn together based on their mutual knowledge and information