On February 4, 2006 the APU circle Waidako "Raku" and its sister group Mai "Raku" put on their second performance in the APU Millennium Hall. The auditorium was full of people enjoying the vivid theatrical performances and Japanese taiko drumming. 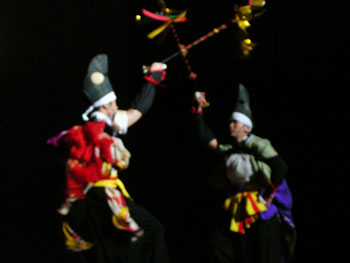 Mai "Raku" was established by members of Wadaiko "Raku" who wanted to try their hand at traditional dance and theatrical performances. Members of the newly formed group expressed that they hope the two groups can collaborate again in the future.

Wadaiko's debut was held almost 2 years to the day and the members hoped to express their feelings of appreciation through their spectacular performance. The group contains a lot of fresh talent as many of the original members have now graduated, and through their recent performance they hoped to convey these new group dynamics.

The night commenced with a lively fisherman folk-song from Hokkaido to celebrate the big voyage and through song prayed for success. Most "Raku" performances can be traced back to a particular region in Japan. The 12 acts originated from the north from areas such as Hokkaido and to the south in the onsen-rich City of Beppu.

Ms. KOBAYASHI Ayumi, a member of the APU circle Wadaiko "Raku" (APS 3, Japan) commented that she appreciated the support and understanding that "Raku" has received from so many people. "People come from far away to see our performances so we aim to put on a lively show and we hope that our group continues to grow and improve."

After the performance, a lady whose whole family is a huge fan of Wadaiko "Raku" commented that the enchanting sound of taiko really touched her heart and that she could feel the energy generated from each of the members. 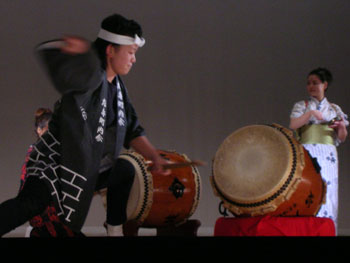