When Haruaki Deguchi, the current president of Ritsumeikan Asia Pacific University (concurrently Trustee and Vice-Chancellor of The Ritsumeikan Trust) assumed office in January 2018, he was selected in a recruitment process uncommon for a Japanese university—one that accepted candidates from outside the Ritsumeikan system, including from overseas. Given the success of this process, the university established the Regulations for the Selection of Ritsumeikan Asia Pacific University Presidential Candidates on October 25, 2019.

The selection process for the next president proceeded according to these regulations, and on November 27, 2020 the Board of Trustees of the Ritsumeikan Trust selected the current president, Haruaki Deguchi, to serve a second three-year term from January 1, 2021 until December 31, 2023.

A Message from President Haruaki Deguchi 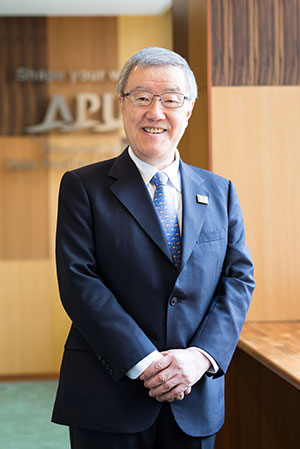 I became APU's fourth president in January 2018 after being nominated and selected in the university's first attempt at open, international recruitment, and have now been appointed to a second term. In order to fulfill our duty of raising the level of education and research and of producing superior graduates, I have pursued specific initiatives since assuming office three years ago while focusing on three important themes: Setting goals in order to realize the APU 2030 Vision, establishing a fiscal foundation, and improving our perception within society. We have worked hard, pursuing a variety of projects and goals, including:

As part of celebrating 20th anniversary of the university's founding, we will hold the "APU Design Challenge" on November 27, 2020, a concrete step in realizing the APU 2030 vision, "APU Graduates possess the power to change our world."

The three years beginning in 2021 will be the first three years for us to implement and put into practice this design challenge. In April 2023 we have plans to establish a new college; to reform existing colleges, graduate programs, and centers; and to erect new buildings on campus. Looking ahead to the next ten years, we aim to establish "APU Global Learning" as an international model. At the same time, we will contribute to the local community, promote research with an international reach, support the diversification of student careers, strengthen our alumni networks, and advance governance reform.

I will continue to work with all stakeholders, including students, graduates, faculty and staff, residents of Beppu and Oita, and our partners across Kyushu. With their help, I will do my best to fulfill my mission as president. Thank you all for your support and cooperation.