The Spring Farewell Ceremony for 57 incoming exchange/study abroad students from 31 partner universities in 14 countries and regions of the world was held at the Student Hall on Wednesday, July 11. 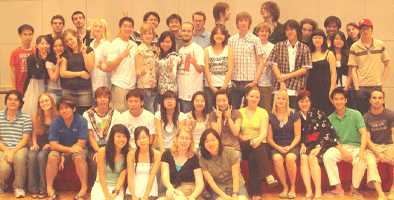 Professor Makita, Associate Dean for APU Academic Affairs presented the students with their certificate of participation. After the ceremony, the students enjoyed the farewell performances by APU circles; “Wa-daiko~Raku~”, APU Eisa Team “Campur” and “Musy Tone”.

The students said, “The experiences we earned and friends we met in APU’s multicultural educational environment have become a valuable asset of life.” The students seemed sad to leave APU behind but also showed anticipation for new challenges in their home countries.