A number of APU student club members took advantage of the summer holidays to engage in exchange activities with student clubs from Ritsumeikan University (RU).
Between August the 1st and 5th, members of the APU Taekwondo club went to the RU campus to participate in the '2nd Taekwondo Exchange Event'. Students from Otani University also participated in the event, giving the APU students the chance to practice in an environment very different to what they are used to. The training sessions proved to be an extremely valuable and worthwhile experience for the APU Taekwondo club, through which members were able to pinpoint their weaker areas. In particular, the female members of the club were able to practice their 'kumite', something they don't get much chance to do at APU. The Taekwondo club plans to continue such training sessions and hopes to put what they learned at RU to use during the Oita Prefectural competition in October, the Kyushu competition and the all Japan competition being held next February. 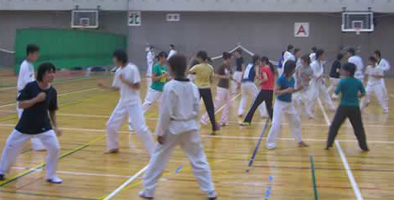 APU's Aomori Traditional Arts Circle 'Arauma Chiyo' and the 'Don Wadaiko' Drumming Group from RU, held a joint two day training session on the 16th and 17th of June at the Kinugasa Campus. The clubs held this training session in preparation for their participation in the Ohkawadai Arauma Festival, held in Kitatsugaru in Aomori Prefecture between August the 4th and 7th. Former club members from both clubs also joined in the training sessions, together perfecting their moves, exchanging ideas and thoughts about the Arauma, dance of the untamed horse, and overall making the two days a very worthwhile experience. The fruits of their training session were clearly visible as members walked and performed along the streets of Ohkawadai in Imabetsu Town, the home of Arauma. Both clubs plan on using Arauma dance as a means to learn more about each other and strengthen club ties.

In addition to the above mentioned club exchange events, the Men's Lacrosse teams from both APU and RU also held a joint training session and exchange event, as did a number of other clubs. These exchange events helped deepen ties between APU and Ritsumeikan University and motivate all students involved. 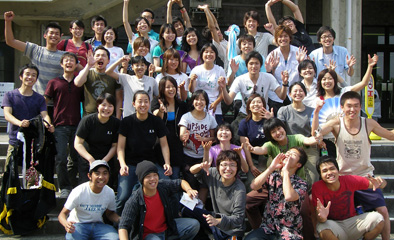