APU is in collaboration with the Japanese Grant Aid for Human Resource Development Scholarship (JDS) on a venture which involves a program implemented by the Japan International Cooperation Agency (JICA). This program has the aim of developing young highly skilled personnel in public administration, business and research within the Asian nations to which Japan provides aid. 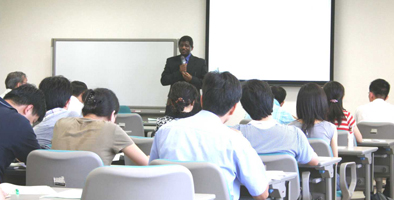 APU is accepting a large number of JDS students into its postgraduate programs and as of the 2007 Fall Semester, 37 JDS students from 8 countries and regions are studying here at APU.

On Thursday September 20th 2007, the orientation for the new JDS students was held at the APU campus. Following the welcome greetings of Vice President Cooper and Prof. Sanga (Dean of International Cooperation & Research Division), faculty & staff members in charge of the JDS programs introduced themselves and explained the role of each APU office to the new students.

The students in attendance appeared to be in high spirits as they began their new student life in Japan.