The Mozambique Ambassador to Japan, His Excellency Mr. Daniel ANTONIO and the Haitian Interim Ambassador to Japan, Mr. Jean Claude BORDES visited APU on 28th April 2008. They met with APU President Monte CASSIM, who, together with a student from Mozambique currently pursuing his studies at APU, extended a warm welcome to both ambassadors.The student, Mr. COROA Helton Jose (APM1 Mozambique), made this remark: "Although I was very nervous to meet both ambassadors, I was very honoured to be able to attend and listen to their talk with President Cassim".

This visit was made possible thanks to Mr. WAKABAYASHI Yasuhiro, an APU alumnus and former representative of the APU premier student organization "PRENGO". The former PRENGO member became acquainted with both ambassadors through the One Village One Product (OVOP) Summit in October 2006 and maintained contact with them ever since. Before visiting APU, the ambassadors visited Mr. HIRAMATSU Morihiko, the advocate of the OVOP movement and Honorary President of the International OVOP Policy Association, and held a discussion on the promotion of OVOP cooperation. 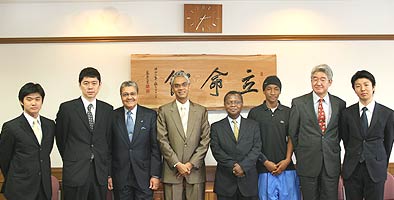