Mr.SAKAMOTO Tatsu, a staff member from the Personnel Department of MIKI HOUSE gave a lecture entitled "How we use experiences in our life and work" on May 14, 2008 at APU. 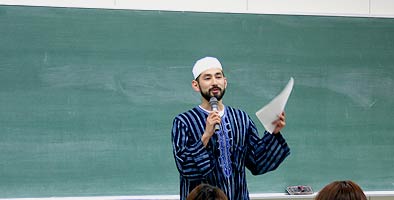 Mr.SAKAMOTO completed a world- round trip by bicycle during a 4 year, 3 month paid vacation beginning on September 26, 1995. He has since then, alongside his work at MIKI HOUSE, given lectures nationwide, written publications and novels that tell of his own experiences and acquired knowledge during the trip, and the importance of having a dream. He also works as a visiting professor at Waseda University giving a lecture titled "Cross-cultural Understanding through World Experiences".
.
The lecture with a simultaneous interpreter was divided into two sessions. Mr.SAKAMOTO, wearing Guinean traditional clothes, talked about his experiences and the people he met during the world-round trip, showing pictures. He mentioned that the lesson he learned through this world-round trip, is that "the best way to be accepted by others is to show respect for the things most important to them". The attending students listened to his story earnestly. 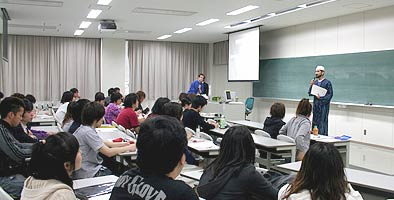