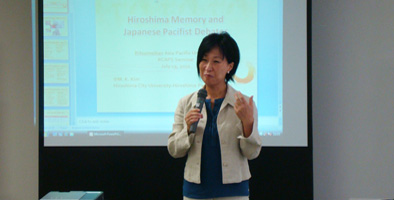 On Monday June 19, a RCAPS sponsored seminar was held at APU.

While researching Hiroshima, its museum and the concept of peace in Japan, Professor Kim's main question was: "Is Hiroshima a pacifist hero?" To answer her question, Professor Kim discussed the controversial issues concerning the 'Aggressors Corner' which arose with the museum renovation project in 1987 in which there were clashing beliefs between the conservatives and the progressives of Hiroshima city.

The controversy showed an ideological divide regarding Japan's unsettled past and Professor Kim went on to discuss the confusing identity construction in Japan and the lack of a core center in Japanese pacifist ideology. The lack of center, she explained could be seen when the controversies of 1987 were settled by a compromise between the two groups.

She quoted Kawai Hayo who described this lack of core as a "Hollow Center [...] which serves a as a buffer zone preventing the confrontation" (1982). In conclusion, Professor Kim discussed the ideas of peace, pacifism, and peace movement, saying that rather than pacifism as an 'ism' implying an uncompromising ideology, Japan's pacifism should be referred to as Japan's pacifist movement, which is still flexible and changing.

After the seminar Professor Kim invited questions from the audience and some discussion was held.