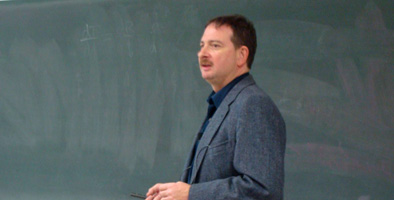 On Wednesday, November 10, an RCAPS sponsored seminar was held at APU. The seminar welcomed Mr. Phil Keys (US Correspondent, Nikkei Electronics) to give a lecture titled, "The Obama Stimulus Package and Other US Clean Energy Policies".

The development of clean energy technology is considered by many to be a key solution for the many environmental, economic and security issues the world currently faces. Phil Keys, the U.S. Correspondent for Nikkei Electronics, has closely followed recent changes in this field, and came to APU on November 10, 2010 to deliver an RCAPS Seminar entitled "The Stimulus Package and Other U.S. Clean Energy Policy Topics in the Time of Obama." The seminar, chaired by Professor Nakata of AP-IMAC, drew many Japanese and international students who are interested in learning more about this fast-changing industry.

Mr. Keys began his lecture by noting the scale of the American Recovery and Reinvestment Act of 2009 (also known as the "Obama Stimulus Package" or "New Green Deal") and describing it as having two defining features: first, he compared it to a "chameleon" because even though it outwardly appears to be a stimulus package, it is essentially a mechanism for the government to invest a large amount of funds into new technology. Second, the Obama Stimulus Package is acting like a bridge to carry the troubled economy- and in particular, promising sectors like clean energy technology- through this downturn so that the U.S. will be robust and competitive when the global economy recovers again. In other words, unlike stimulus packages that focus on immediate results and short-term economic growth, the Obama Stimulus Package is geared towards long-term investment and growth. This, however, has met with backlash from Americans who expected to see instant benefits from the plan, and impacted the recent mid-term elections where the Democratic party lost many seats in Congress.

Although the political shift in the United States could potentially slow down or even halt any progress that has been made through the governments support of clean energy technology, Mr. Keys showed how the funds have already been able to support solar and wind energy projects, Smart Grid technology, and the market for electric vehicles. The future of clean energy technology seems certain- it will be a central part of the global economy this century- and the question that remains for the U.S. is what role it will play in the market. Mr. Keys finished his presentation by presenting a best and worst case scenario for the U.S., with the worst being a complete halt of progress due to political fighting, and the best being continued development of clean energy technology in spite of the political climate, turning America into a leader in clean energy.

The seminar ended with Mr. Keys fielding questions from the audience and sharing more of his insight on the situation in the U.S. 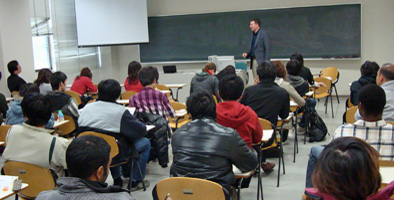