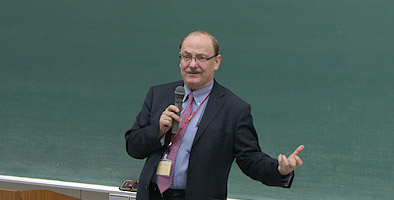 The 2010 Annual AP Conference was held at APU on November 20.

The of the conference theme this year was "Outlook for the Asia Pacific". The event featured Dr. Kent Calder as the keynote speaker and Dr. Koichi Iwabuchi and Dr. Kazuichi Sakamoto as distinguished speakers.

The Keynote speech of the Conference, "Implications for the Asia Pacific Ties: American Asia Policy Past Progress and Future Prospects" was given by Dr. Calder from the Edwin O. Reischauer Center for East Asian Studies of John Hopkins University.

In his speech Dr. Calder discussed the past progress and future prospects of U.S. President Obama's Asia policy. He emphasized two central challenges that Obama's administration faces with regards to Asia.

Dr. Calder cited several examples of how the Obama administration and the Bush administration differ in their tactical and philosophical approaches. He discussed how Obama has stressed engagement, even with ideological foes, and has stressed democratic transformations, and pursuit of human rights.

He also explained how the Obama administration has been much more multi-lateral in its Asia diplomacy than the Bush administration ever was. Looking to the future, Dr. Calder emphasized that Obama's preeminent challenge is the rise of Asian continentalism, not just China, but deepening ties among China, Russia, and India. In this regard he explained that America needs to comprehensively deepen its ties with India and also to broaden its cooperative endeavors with Japan.

Dr. Calder's speech was followed by Dr. Iwabuchi (Faculty of International Research and Education, Waseda University)'s speech, "Towards De-nationalized Dialogues: Beyond the Global Governance of Culture".

In his speech Dr. Iwabuchi discussed how the media is being restructured and transformed through the emergence of cultural public spheres, and how it is being governed as a resource for national interest.

He cited several distinctive characteristics of this trend including, transnational alliances of media culture industry, and the rise of inter-national show cases and media spectacles.

Dr. Iwabuchi then spelled out some negative aspects of this emerging phenomenon such as how the governance of culture discourages critical understanding of the complex processes of uneven globalization and how it sidelines less dominant cultures. In conclusion, Dr. Iwabuchi encouraged the promotion of cultural expressions that do justice to socio-cultural diversity.

In his speech, he explained that the emerging Asia Pacific age signals not just a historical concept, but also a new evolutionary pathway of civilization which is based on the long pattern of evolving civilizations.

Dr. Sakamoto pointed out that Asia Pacific studies should aim to build this Asia Pacific civilization through strategy and policy studies.

Two issues that he stressed are: conserving the natural environment sustainably while dealing with economic and political issues, and creating a global social order without creating hegemony so as to promote world peace. Vice President Malcolm Cooper closed the conference by thanking everyone involved and summarized the overall theme he saw in the presentations: that change is occurring in the Asia Pacific region and the need to research and educate about the changes. 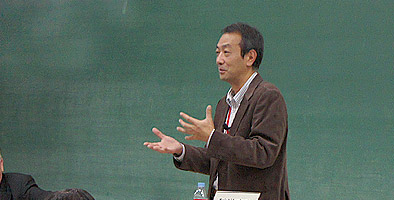 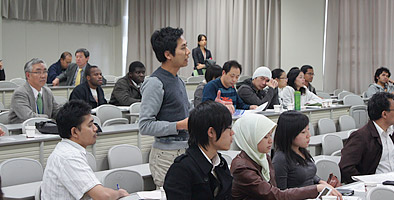