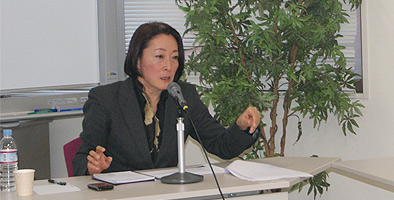 On Wednesday December 15, 2010, Ms. MIZUTORI Mami, Senior Fellow at the Sainsbury Institute for the Study of Japanese Arts and Cultures (UK), delivered an RCAPS Seminar on the topic of "Promoting International Cultural Exchanges: Does it really matter?".

This lecture was hosted by APS Prof. Kazuhiro FUJIMURA and focused on the importance of cultural exchange and drew on Ms. MIZUTORI's experience in the field of Japanese art and culture.

Ms. MIZUTORI began by describing the various reasons why nations engage in international culture exchange and cultural diplomacy such as the need to establish national identity, avoid conflicts and as a way of improving relationships between nations as seen in the example of the 2002 FIFA World Cup co-hosted by Japan and South Korea.

Citing reasons such as increasing taxpayer scrutiny and the difficulty of presenting the outcomes of cultural exchange in concrete terms, she described how cultural exchange budgets are declining in these developed countries.

Ms. MIZUTORI concluded by answering the topic question of her lecture, "Does promoting International Cultural Exchanges really matter?", by highlighting the short term and long term consequences of declining cultural exchange including a reduction in the flow of ideas and people between nations, the cultural "hiki-komori" phenomena and the danger when this is accompanied by economic protectionism.

"The lecture was followed by a Q&A session during which she remarked that the world we live in is connected and no country can live in isolation, and that it.is important for all of us to while promoting our own culture also understand and accept the culture of others".

RCAP was established in July 1996 with the aim of promoting research into the comprehensive developments and the challenges that face the Asia Pacific region in the 21st century.

RCAPS seminars are held regularly at which lecturers from both on and off the campus are invited to share research findings in the field of Asia Pacific Studies. 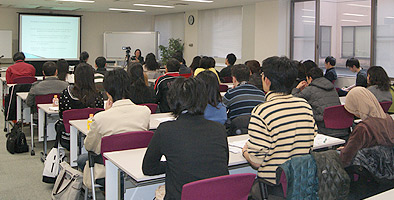