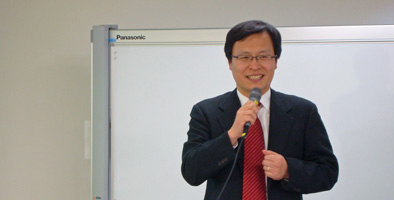 On Wednesday, November 10, an RCAPS sponsored seminar was held at APU.

The seminar welcomed Dr. YOU, Seok-Hoon (Professor, Department of Linguistics, Korea University, RCAPS Visiting Research Fellow) to give a lecture titled, "A Modest Proposal for an Advanced-level Language and Culture Education".

Dr. You's seminar addressed language education and its history, and The Language Flagship (TLF) as a case study to show how Korean is being taught efficiently at the Korean University to American students in the TLF program, part of the United State's initiative to produce advanced foreign language speakers. In the review of the history of language teaching Professor You discussed the three main phases of language education: the classic, modern and contemporary periods.

The contemporary approach focuses on form like the classical approach, but the overriding focus is on meaning and communication. Professor You then went on to discuss the US government's National Security Language Initiative (NSLI) which was launched to: 1. Expand the number of Americans mastering critical need languages and start at a younger age. 2. Expand the program to a 13.2 million dollar program (in 2006) aiming to produce 2,000 advanced speakers of Mandarin, Chinese, Arabic, Russian, Persian, Hindi, Urdu, Swahili, Yoruba and Korean. 3. Increase the number of foreign language teachers and the resources for them.

The case study Professor You discussed was the The Language Flagship Korean Overseas Program at Korea University, TLFK-KU, in which US students spend one year at the university of Hawaii learning Korean before moving on to Korea for one year to study at Korea University where they are expected to achieve advanced Proficiency Level in Korean.

The students who successfully complete the program not only reach a level of Advanced/Superior level of Korean in two years, but also become Korea specialists, finding career opportunities in Federal government agencies, academics, privates sectors, etc. Professor You described the program as a task based teaching program, composed of 5 major components, internship, major subjects, media course, adjunct course (Korean grammar), and other activities.

The program is tailor made for each student's need and interest so that they study Korean language and also their major subjects in Korean while at Korea University.

At the end of the seminar Professor You showed a video clip of a student who graduated with the highest Oral Proficiency Level speaking in Korean.

The seminar was followed by a Q&A session in which many the audience asked Professor You questions regarding the TLF-KU program and Korean language education. 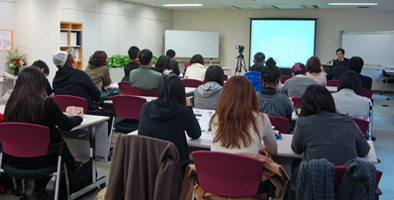