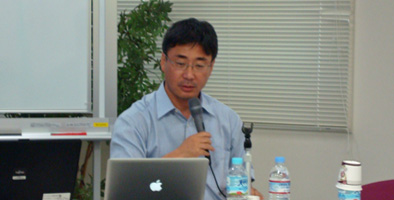 On Thursday June 23rd, an RCAPS sponsored seminar was held at APU.

On June 23, 2011, Professor Hiroyuki Tosa (Graduate School of International Cooperation Studies, Kobe University) came to APU as a lecturer of the RCAPS Seminar.

He gave a lecture, titled "Crossing Bio-political borders through Aesthetic Works: Challenging the Fortress against Asylum Seekers," which dealt with the role of aesthetic works (such as films and web arts) on the securitization of migrations from a critical perspective of political science and International Relations (IR). First of all, Professor Tosa presented situations in which those crossing borders were often strictly controlled by governments.

For example, since 9/11, governments of the Global North regarded immigrants as external threats and put the flow of immigrants under their control by highly bio-technological ways, such as DNA fingerprinting and identification, electronic tagging and biometric ID cards.

He said that this new type of racism played a significant role in "immunizing" the homeland from the threats. The lecture then went on to the role of aesthetic works in securitizing migrations. Professor Tosa introduced some films and web arts which documented miserable situations of immigrants or those who were illegally crossing borders.

He mentioned that these works seemed to wake us up to the fact that governments violently ignored the immigrants' freedom of movement under the name of state sovereignty. He additionally pointed out that, while these works could shake the foundations of realist paradigm by indicating the possibilities of marginalized people's dream, they actually influenced the realist political rationalities by arousing emotions and empathy.

As such, aesthetic works may point to a new way of thinking and doing in political science and IR. He concluded that the current world was moving back and forth between exclusion and inclusion against migrations and the aesthetic works were pushing the movement of inclusion. In his perspective, the exclusion was based on the philosophy of the Westphalian worldview, and, on the one hand, the inclusion showed that of the post-Westphalian.

Professor Tosa's critical viewpoints on the securitization of migrations and the role of aesthetic works invited various questions from his audience. One asked him about how aesthetic works would influence political science and IR as a whole. Another questioned about what pushing factors of migrations into Japan are and how serious Japan's exclusive practices against immigrations are.

The audience was also curious about the role of non-government organizations (NGOs) on issues related to state sovereignty over immigration problems.

Professor Tosa's lecture was highly thought-provoking and offered a plausible approach to the broadening of political science and IR. 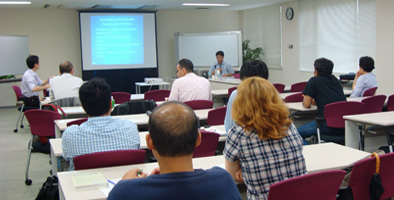