On Wednesday, October 19, an RCAPS sponsored seminar was held at APU. 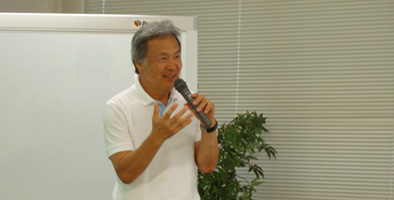 For the past several decades, many natural and social scientists have faced the challenging question of how technology should develop while maintaining the environment, which is the so-called "sustainable growth." By expanding the norm of environmental protection, people began thinking of our activities as not only for ourselves, but also for our children, animals and plants and the Earth. On Wednesday, October 19, Masa Ishii (Managing director of AZCA Inc. and Noventi Ventures in Silicon Valley) gave a seminar concerning this timely topic entitled, "Green Growth through Open Innovation: A Silicon Valley Perspective".

Mr. Ishii began the seminar by introducing Silicon Valley and its history. According to him, today's Silicon Valley is where diverse ethnic groups and people of many different nationalities live together, where high education is provided, where venture capital as a rich financial source for new venture activities exists, and where strong information networks are created.

California and especially Silicon Valley, have many venture capitals in comparison with other states in the United States. Mr. Ishii explained that Silicon Valley is the best place to start and do business in the high-tech industry because of its characteristics: openness and tolerance for failure. Mr. Ishii went on to discuss the important theme, "green technology." Green technology is the most topical high technology in the world today.

Silicon Valley is now a leading place of green technology because of its high-tech ecosystem: a significant process of innovation in which ideas produce new products via networks among entrepreneurs, venture capitals, universities and research institutions. At the same time, Mr. Ishii described that policies of California and the Green New Deal Policy of the United States helped the development of green technology in the region. 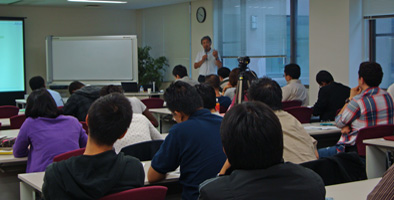 In conclusion Mr. Ishii introduced the concept of "open innovation for sustainable growth." He explained that firms and corporations need to think of "P3"—people, planet and prosperity—when they developing technology. They should develop technology for people not only in the present, but also for the future.

They should think of the planet and ecological diversity, and for prosperity of all beings, he said. Mr. Ishii explained that the P3s are important concepts for sustainable growth of society and in sum, he said that "open innovation for sustainable growth" is the development of technology by sharing information and technologies from the outside in order to commercialize products which meet not only our own needs in present, but also the needs of future generations.

The lecture ended with active exchanges of opinions and questions from the audience. Some gave critiques of green energy and sustainable growth, others asked Mr. Ishii some questions on the future status of Silicon Valley, the new high technology coming in the future and a way to transplant the ecosystem of Silicon Valley into different places.

Mr. Ishii's lecture was highly thought provoking and offered a great opportunity to think of the importance of sustainable growth as well as the development of high technology. 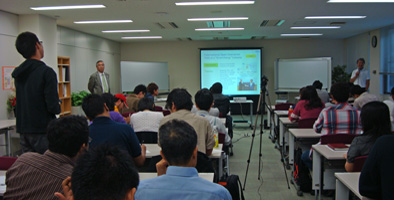