Held under the theme of "Change in the Asia Pacific," this two-day conference featured approximately 70 research presentations by faculty, graduate students and international researchers in the field of Asia Pacific studies. Following an welcome address by APU President KORENAGA Shun, the IAAPS President and former President of APU, SAKAMOTO Kazuichi, gave a few words and expressed his hopes for the conference. The first keynote speech was delivered by Dr. Shin Kak-Soo, the Ambassador Extraordinary and Plenipotentiary to Japan from the Republic of Korea. During his speech, the Ambassador focused on the prospects for greater integration in North East Asia, in particular Japan, Korea and China. "These three countries have risen from the shadows of war and poverty to become one of the most dynamic and fastest growing regions in the world. However, this region lags behind other parts of the world in terms of integration. Europe provides a good example of how to overcome an unfortunate history to become highly integrated. For our three countries to enjoy a closer relationship we need to increase greater people-to-people exchange and build a systematic cooperation network at a range of levels." 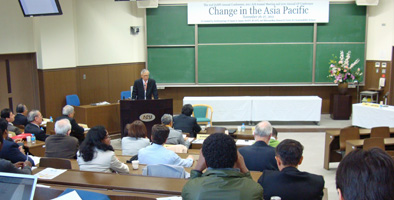 The second keynote speech was offered by Professor Hsin-Huang Michael Hsiao (Director, The Institute of Sociology, Academia Sinica) under the title of "The Ethnic Movements, NGOs and the Impacts on Ethnic Policies in Today’s Taiwan." Professor Hsiao started his presentation by briefly explaining the types of ethnic diversity found throughout the Asia Pacific region. He then talked specifically about the ethnic diversity found in Taiwan, including its historical origins. In particular, he focused on three different ethnic minority groups: the indigenous people, the Hakka, and new immigrants. He described how the activities of NGOs operating in Taiwan have affected socio-economic change in the livelihoods of these three groups. In the conclusion to his presentation, Professor Hsiao noted that "ethnic diversity was historically created and politically distorted." He observed that the Taiwanese government has taken a slow and hesitant policy in considering and adopting the advice of NGOs in improving the livelihoods of the ethnic minority groups in Taiwan. 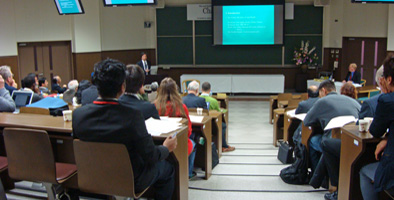 This was followed by the IAAPS General Meeting and the screening of a film directed by APU graduate student, DIPESH Kharel (GSAD, Nepal). Day two of the symposium featured oral and poster presentations by researchers in the field of Asia Pacific Studies and covered a wide range of topics including tourism, climate change, international relations, agriculture and the recent Great East Japan earthquake and tsunami disaster. 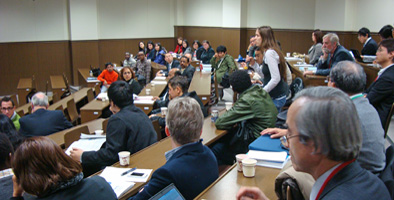