On Thursday, December 8th, an RCAPS sponsored seminar was held at APU. 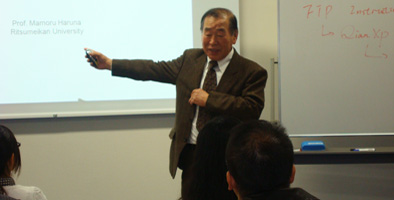 Professor Haruna explained "Theory Systems" and explained three major problems which arise with project management, these being, "Economical & Administrative Problems", "Construction & Technical Problems" and "Planning Methodological Problems". As an example, he gave the Kyushu Shinkansen which has recently opened, explaining that before it could be open, 20 years of planning and work had to take place. He explained that his field deals with how to establish the planning methodology.

He described the framework of the "System Approach" which includes analysis and integration, which he called the "Analytical Study for Integration", and explained that the "attainment of consistency" is what becomes the most important for the quality of society. He also described his general planning process and system for urban developing, and the 6 types of urban infrastructure: Disaster Prevention, Communication, Living (Social), Industrial, Cultural and Educational, and Resort and Leisure and how they are related.

At the end of the seminar, Professor Haruna briefly showed examples from different cases he had worked on, including an example of development in Otsu city, and a plan developed for transportation in Kustatsu city by himself and APU Professor Qian Xuepeng, which would shorten transportation costs and time for students of the Ritsumeikan BKC campus.