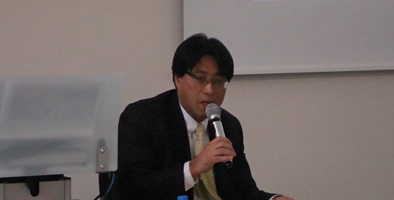 Dr. Hirosato first showed the percentages of students entering higher education in the various Asian countries, which have been bipolarized into countries with low admission rates and ones with high admission rates, even within the same Asian region. Narrowing this gap is essential for regional cooperation in higher education, Dr. Hirosato asserted. In this region, forms of economic cooperation such as free trade agreements have been proceeding ahead, but without narrowing the various gaps between the countries, the process of integration of this region will not proceed smoothly, he suggested. He said it is important to devise a bottom-up approach to higher education in low income countries in the region. 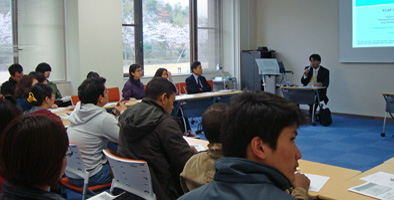 During the question and answer session following the lecture, students from Asia and Africa asked questions and gave comments from the points of view of their own countries, and a vibrant exchange took place. As Dr. Hirosato's lecture was based on his own experience in the ADB, the lecture was a great opportunity for students who wish to work in an international organization in the future to learn about actual work in such an organization. 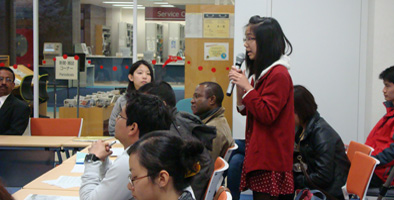 This lecture was made possible through the invitation of APS Professor Shunso Tsukada.