Thursday, October 25, 2012, Mr. Masazumi Ishii (Managing Director of AZCA, Inc.) gave an RCAPS seminar entitled “Revitalizing the Venture Ecosystem in Japan: A Perspective from Silicon Valley”. In the second half of the seminar, his wife, Ms. Junko Ishii, talked about how the United States is seen through the eyes of a Japanese person living in Silicon Valley, under the theme of "Two Sides of American Society: A Perspective". 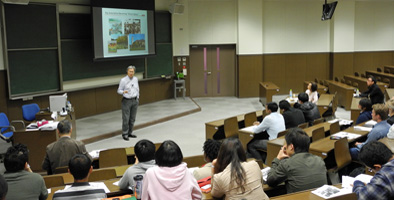 Many world famous companies are based in Silicon Valley, as is the company run by Mr. Ishii. While speaking about the region itself, the companies operating there, the managers of those companies, and the number of innovative products they have produced, Mr. Ishii described the unique characteristics of the region, which include a multi-cultural environment, a large degree of higher education, an accumulation of high-tech industries, and a vast amont of funds for venture capital. 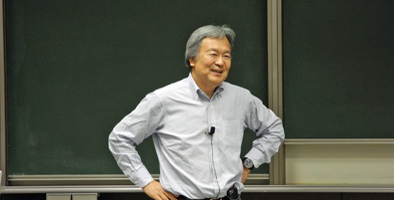 Mr. Ishii pointed out that important factors to generate innovation are "openness" and "tolerance for failure". "Openness" refers a circumstance where opportunities and the means to tackle challenges are opened up to people of various backgrounds, as well as to situations and a culture which is not exclusive to goods, information, or opportunities, but is always seeking novelty, with an attitude of acceptance to new ideas.

Mr. Ishii explained that he sees a mistake as a chance for the better, and an atmosphere in which a mistake or two is not feared is one of the conditions needed to create revolutionary products or services.

Then, on top of that background of the region, he explained that entrepreneurs, research institutions such as universities, and venture capitalists are organically linked to each other, creating the ecosystem of the industry. He also mentioned that in Japan, in order to develop such an ecosystem, policies have been undertaken to promote the circulation of people, knowledge and funds between Japan and Silicon Valley. 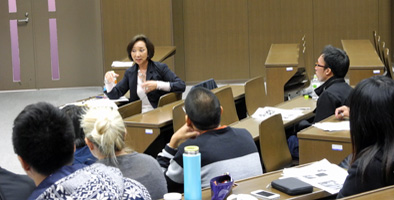 Ms. Junko Ishii talked about various aspects of American society that she has experienced in her life in the US over many years. While there are aspects that can not be said to be beneficial for the people, such as the level of food nutrition and the insurance systems, the culture to value openness and freedom is a charm of the society of the United States.

This lecture was made possible through the invitation of APM Professor Yukihiko Nakata.