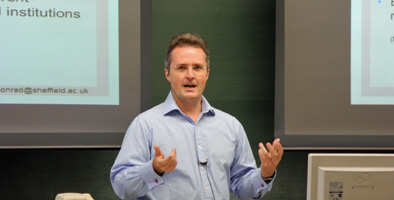 
He gave a presentation of his research on recent human resource practices in Japanese companies, especially in the occupational pension area. The research was previously published as articles in the International Journal of Human Resource Management and the Journal of Social Policy.

Following his terms at APU and the German Institute for Japanese Studies in Tokyo, Dr Conrad is currently Sasakawa Lecturer in Japan’s Economy and Management at the University of Sheffield's School of East Asian Studies. Dr Conrad started his presentation with an overview of the traditional Japanese management model that was quite different from the liberal market economy system applied in many developed countries.

The Japanese model puts more emphasis on coordinated relationships between players in the long-term nature, including in its industrial relations. However, human resource policies in many big Japanese companies have been gradually changing since the 1990s by incorporating performance as another important factor to complement the seniority and skills factors in their compensation schemes.

One of the current trends in compensation is the shifting of occupational pension policy, by the introduction of more alternatives to the previous Defined Benefit plan that is now also combined with Defined Contribution and performance-mix plans to adapt to the recent business situation, demographic change, and public (government) policy.

While the on-going reform is already being implemented by major companies, Dr Conrad concluded that there is still no convergence of human resource practices in the Japanese model with the liberal market economy.

During the Q & A session, Dr Conrad and the audience also discussed the roles of government, HR functions, and labor unions to accelerate overall occupational reforms in Japan. This lecture was made possible through the invitation of APM Professor Kaoru Natsuda. 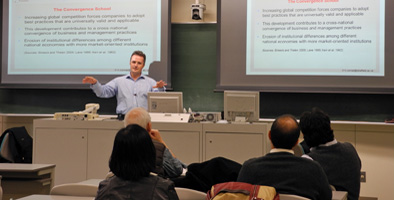