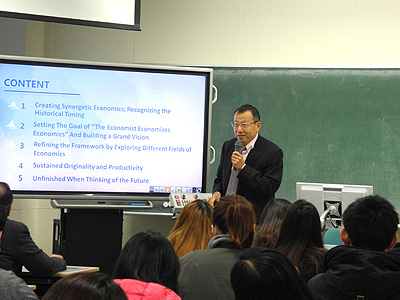 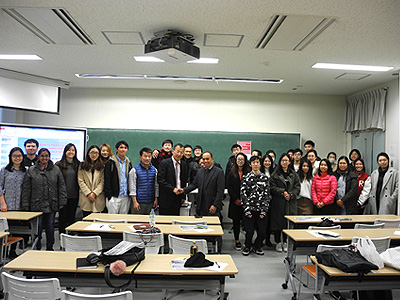 On Constructing the General Economic Theory – A non-mathematical exposition
Prof. Zhang explained how he has developed a general economic theory on the basis of the traditional economic theories with help of modern mathematics and computer. The presentation was conducted in 5 parts as follows.

(1) Creating synergetic economics and recognizing the historical timing (1982-1991)
Prof. Zhang first briefly introduced the main ideas by the classical economists from Smith to Keynes and the main models in economic theory from Samuelson to the present. He also mentioned that empirical studies have shown limitations of the economic theories. The existing theories have failed to explain/predict many phenomena of modern economies in an integrated manner. He had already recognized that the newly observed phenomena demand a higher theory. Then he talked about construction of his first book on nonlinear economics when he was student in civil engineering in Kyoto University. He went to Sweden in 1987 to do research in economics. When he was simultaneously completing his dissertation Economic Growth Theory (published by Springer, 1990) and Synergetic Economics (Springer, 1991) in 1989, he recognized the historical timing for integrating the economic theories by producing a general economic theory. His book Synergetic Economics (which is the first book on nonlinear economics in comprehensive sense) applies the advanced ideas in natural sciences and mathematics to economics. The book is the analytical foundation for his future adventure.

(2) The goal of“the economist economizes economics” and a grand vision (1991 - 2000)
Basing on his synergetic economics and the traditional economic theories, Prof. Zhang decided to build a general economic theory. By 1991 he claimed that such a Theory should include the main economic ideas of Smith, Malthus, von Thunen, Ricardo, Marx, Mills, Walras, Marshall, Schumpeter, and Keynes. It should also include, as special cases, the well-established mathematical models, such as the Arrow-Debreu general equilibrium model, the Tobin model, the Solow-Swan-Uzawa growth model, and the Oniki-Uzawa trade model. His mission statement “the economist economizes economics” in his book “Knowledge and Value” expressed what he wanted to do in economics as Albert Einstein illustrated: “the grand aim of all science is to cover the greatest number of empirical facts by logical deduction from the smallest number of hypotheses or axioms.” He illustrated the general framework for completing the grand aim.

(4) Sustained originality and productivity (2011- the present)
Since 2010, he has been concerned with introducing important economic issues (most of them are not analyzed by traditional economic theories) into his grand theory. For instance, he introduced gender preference changes, habits, fashions, land value, gold value, environment and economic structural change, renewable resources, envy, discrimination, amenities and residential location, and many other issues into his integrated framework. Since 2011 he has already published 90 articles in peer-review journals.

(5) Unfinished when thinking of the future
Prof. Zhang points out that his general theory will be only a limiting case of more general theories in the future as there will be great advances in computer, data availability, development of sciences, and mathematics. Team work will be much greater than an individual achievement in solitude. He quoted Paul Samuelson: “Funeral by funeral, theory advances.”