On May 19th, 2017, as the first of the new RCAPS Onigiri Seminars, Professor Sharalyn Orbaugh of Canada's University of British Columbia gave a talk entitled Popular Culture as Propaganda: Kamishibai (paper theater) in Japan's Fifteen Year War, 1931-1945.
Because the seminar began at 14:15, the provided snacks were not onigiri but rather cookies and chocolate.

The RCAPS Onigiri Seminar attracted more than 60 participants, with the audience ranging from undergraduate and graduate students to faculty members, and office staff.

Professor Orbaugh's talk began with the pre-war history of kamishibai as a form of media and then moved to an explanation of the main functions and characteristics of this medium, discussing the way it appeals through five senses (sight, auditory, taste, smell, touch). Professor Orbaugh demonstrated how these characteristics were amplified to maximize the effect of the medium as a powerful propaganda tool. She introduced the works of kamishibai performers (predominantly male, but females in wartime), as well as interactions between them and the audience (both children and adults). During her talk, she also showed the audience a couple of actual kamishibai (sets), which are very precious. 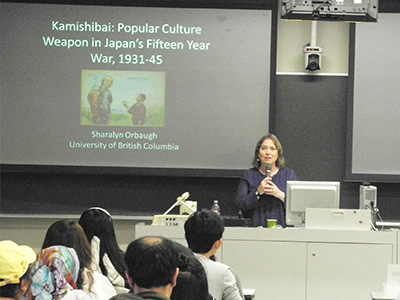 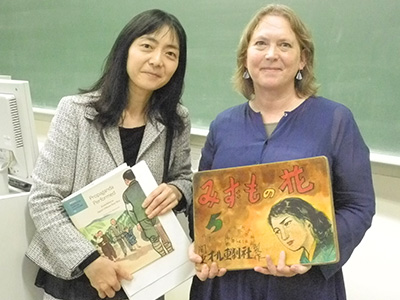