Seminar Report "Digital Economy: Is it an evolution or revolution?"

On May 31 (Wed), 2017, Professor TSUKADA Shunso (College of Asia Pacific Studies of APU) gave a talk at the RCAPS Current Research Seminar in the RCAPS Conference Room A.

Bitcoin has long been regarded to be a dubious and even dangerous currency. It has suffered from dark image associated with money-laundering, huge fraud by Mt. Gox, and more recently by Ransomware. The purpose of the Current Seminar was to clear away this image through the provision of clear explanation on the nature and mechanism of bitcoin and the potential impact of bitcoin on the economy.

The Seminar was held on the 31st of May at RCAPS seminar room at APU. The speech was delivered by Shunso Tsukada, Professor of APU under the facilitation of Prof. Joseph Progler, Director of the RCAPS Center.

The speech first took up technical issues by explaining: (i) what is the cryptocurrencies; (ii) how does it work with particular focus on the structure of blockchain; and (iii) how mining is conducted. It also referred to the recent discussion on the scalability issue.

The speech also covered financial issues, which include, among others,: (i) what has caused the ongoing price hikes of bitcoin; and (ii) whether these price surges would last.

The speech was concluded with reference to possible adverse impacts of cryptocurrencies on the economy, more specifically: (i) unregulated expansion of the informal sector; (ii) resultant erosion of tax base; and (iii) weakening of the effectiveness of monetary policies.

Because of the nature of the topic and close connection to the real-world economy, the seminar was well attended and well received by both faculty and students which were numbered around 20-30. 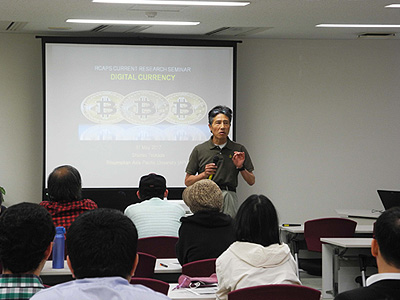 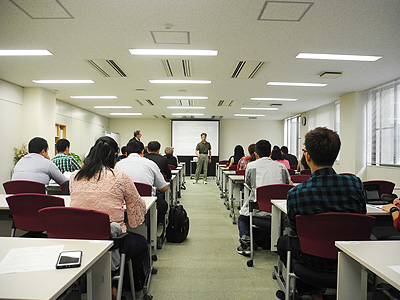