Professor YAMAGAMI Susumu gives a lecture at a RCAPS Seminar:

On Wednesday October 22, a RCAPS sponsored seminar was held at APU. The seminar welcomed Professor YAMAGAMI Susumu, the Dean of APU's College of Asia Pacific Studies. His lecture was titled "Resettlement of Indochinese Refugees and Displaced Persons in Japan; Policy Shift and International Context". 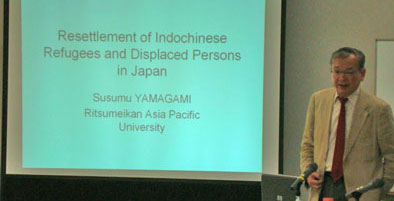 An abstract of his presentation is included below:

Immediately after the fall of Saigon in April 1975, Vietnamese boatpeople rescued by the ships began to arrive at the various ports in East Asia including Japan. During 1975 to 1995, 14,000 arrived in Japan, while 3,500 of them settled in Japan. From the refugee camps in Southeast Asia 4,000 Indochinese Refugees and Displaced Persons (including Cambodians and Laotians) came to resettle in Japan, while another 2,000 came to settle in Japan under the Orderly Departure Program from Vietnam.
The International Conference on Indochinese Refugees and Displaced Persons held in Geneva in 1989 expressed satisfaction with the international solidarity that had made it possible to settle more than 1.6 million until then, while the screening of new arrivals under the terms of 1951 Refugee Convention was agreed to be implemented by all the countries concerned. With the shift of international context, the exodus of boatpeople declined to 55 in 1992 and the screening process was finally abolished in 1994.
I was deeply involved in the policy coordination on this issue during this period and was asked to join the academic research team under UNHCR and other UN organizations in Tokyo to look back the process of their resettlement in Japan and to make a survey on individuals resettled in Japan. On August 28, the progress report was done in the form of international symposium at UNU in Tokyo and I made my report on the above mentioned subject. I am pleased to share my report with those who are interested in this issue. 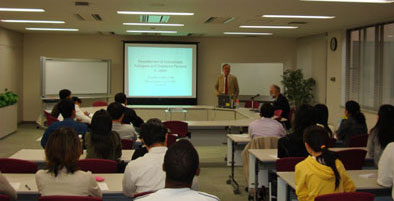