Dr. Richard B. Dasher gives a lecture at a RCAPS Seminar:

On Friday June 26, a RCAPS sponsored seminar was held at APU. 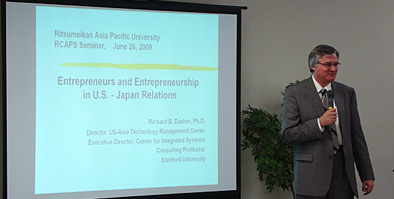 On June 26, 2009 RCAPS invited Dr. Richard B. Dasher from Stanford University to hold a seminar at APU. His seminar was titled "Entrepreneurs and Entrepreneurship in U.S. - Japan Relations".
The seminar addressed the following issues,
"On the role of entrepreneurship in U.S.- Japan bilateral (diplomatic relations, Japanese government support for entrepreneurship, Recent entrepreneurship trends in Japan, A new importance for entrepreneurship".
In his lecture, Dr. Dasher compared entrepreneurship in the U.S. and Japan. One of the difference he stated was that,
"Japan's government has been supporting entrepreneurship as a domestic issue" and is based on a "knowledge-based economy", with an emphasis on innovating, rather than creating, he said.
He pointed out that the difficulties of entrepreneurship in Japan is the lack of mentors, and most young people still strive to work in big companies, to eventually leave something for their children, which does not occur in the U.S.
As well as differences between entrepreneurship in the U.S. and Japan, Dr. Dasher discussed the changing trends of entrepreneurship in Japan today. He listed,
"The breakdown of various unwritten social contracts, Consensus building by government and press: importance of entrepreneurs, innovation, sectoral promotion, M&A becoming robust, Much business in fact focuses on innovation".
Dr. Dasher concluded the seminar by discussing Japan after the collapse of the Bubble, which he said, "is clearly moving from 'managed growth' to 'advanced stage growth'", where business' needs have already been met, and they must constantly be innovating new ideas and be able to manage risks. He also drew a parallel at the end between U.S. President Barack Obama, as a new entrepreneur and Japan, as President Obama brought new approaches, and now must meet the challenges; "can he keep the new vision in the midst of old-style institutions?" he asked.
After the seminar there was ample time for APU professors and students to talk with Dr. Dasher and to address their questions and comments on the topic. RCAPS received many positive responses and comments on the success of the seminar from those who attended. 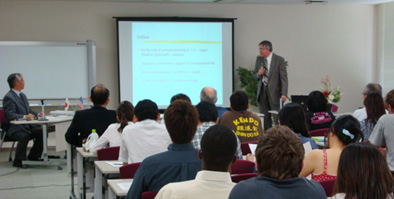