On Monday, May 20, the Ritsumeikan Center for Asia Pacific Studies (RCAPS) of the APU Research Office will host a “RCAPS Onigiri Seminar” organized by APU-APS Associate Professor BUI, Thanh Huong. At the seminar, Mr. Jeffrey E. Hanes, a director, Center for Asia Pacific Studies, University of Oregon, USA, will give a special talk entitled “Welcome to Washington Heights: America Towns and Americanization in Occupied Japan.”

The seminar presents research in progress for a project that has grown and changed in myriad ways since its inception, from the researcher’s interest in studying domestic design, i.e. the design of appliances and other appurtenances of everyday life. The preliminary thoughts on the subject led toward a study of American design’s influences on the so-called “bright life” (akarui seikatsu) that began to dawn on Japan by the late 1950s. Through investigation, the speaker found the term “dependents housing” in a book published in 1948, which was located at Harvard University. Reading that remarkable book—and poring over the copious plans and illustrations contained within it—set the researcher on a new and focused research trajectory from 2016. The researcher proposes a proposition that Japanese development of household appliances was at first for the purpose to support ‘dependents housing’ project during American occupation in Japan right in the late 1940s and the early 1950s. 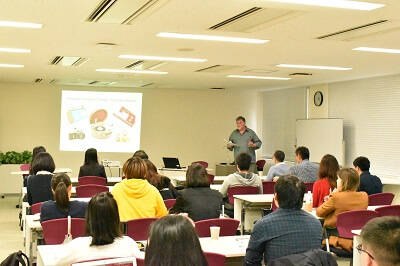 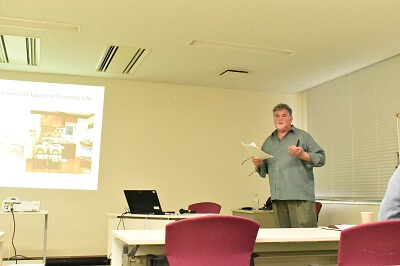 The study of dependents housing in various places in Japan, such as Tokyo, Kyoto and Osaka leads the researcher to another hypothesis about the extent to which memory of dependents housing was not narrated in its original meaning, but has often been forgotten or replaced with more recent image or narration. The study brings a new perspective of understanding place identity and how history has been narrated and remembered.
The speaker was highly inspirational and the interesting research has attracted great interest from faculty and students. Ten faculty attended the seminar with various questions and discussion with speaker. Both undergraduate and post graduate students attended the seminar and exchanged many ideas and questions with the speaker.
The seminar was organized under a collaboration between the University of Oregon and APU and the dialogue between the speaker and audience presented a great example of exchange between scholars of Japanese studies from academic institutions in Japan and the USA.