On Wednesday July 29, RCAPS sponsored a seminar held at APU. 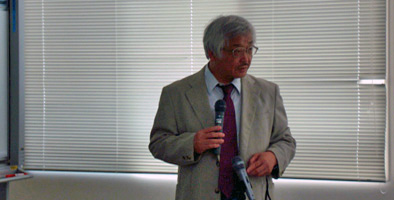 On July 29 RCAPS welcomed Professor Nakamura Koji (Deputy President of Regional Cooperation, Kanazawa University, and Division of Biodiversity Research, Institute of Nature and Environmental Technology) and Dr. Kazem Vafadari (JSPS-UNU Post Doctoral Fellow UNU-IAS, OUIKI & Kanazawa Unviersity) to give related lectures on Satoyama and Satoumi. APU students and faculty members attended the seminar as well as a group from Yamaga Green Tourism.
Professor Nakamura's lecture was titled "The importance of Satoyama and Satoumi in conservation of biodiversity and reactivation of rural areas in Japan: A perspective of Noto Peninsula". In his seminar Professor Nakamura discussed the current situation in Ishikawa prefecture and the threats to Satoyama which he defined as "traditional rural landscape with mosaics of human managed habitats such as rice paddies, forests, ponds and etc." and Satoumi, "a costal zone properly managed by human activities like fishery" in Japan today caused by depopulation and the aging population. He showed how rice paddies and forests had been abandoned and problems that had arisen due to the lack of management of the forests. Professor Nakamura discussed his work in restoring Satoyama and Satoumi by establishing the Kakuma Satoyama Nature School of Kanazawa University, Noto Satoyama Satoumi Nature School, and Noto Satoyama Master Training Project. He also talked about the restoration of the stork and ibis campaign in which they worked to bring back a bird that had become extinct in Satoyama. At the end of his seminar Professor Nakamura emphasized the importance of working in the community with the local farmers and residents to promote conserving the environment and traditional knowledge. Dr. Kazem Vafadari's lecture was titled, "Is Satoyama lifestyle attractive enough? Minshuku System and Promoting Tourism in Rural Japan". His lecture looked into tourism and "The role of tourism in revitalization of rural community and conservation of Satoyama". He discussed how "rural tourism can lead to evolving of local identity, creating market for local products, diversification of local revenue and can contribute to conservation of natural resources if well managed". He said that when asking minshuku owners how tourism was effective, some replied that they had been encouraged by tourists to manage the environment and that tourism had brought a sensibility to the local people. Dr. Vafadari presented his case study of a Minshuku group in Shunran, Ishikawa prefecture. He looked at how a village, through teamwork, used local facilities and products, such as an abandoned school for tourist accommodation, and has attracted more than 3,000 people to the village since 2006, which he sees as a very positive satoyama tourism model. At the end of the seminar, there was time for questions and APU students and faculty members discussed issues of rural tourism and ecotourism with Dr. Vafadari. 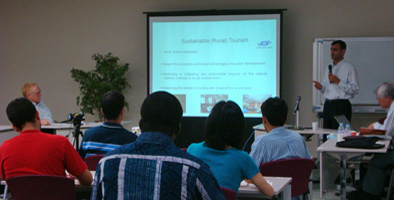