Dr. Takatoshi ITO (The University of Tokyo) at a RCAPS Seminar:

On May 4th, (Monday) a RCAPS Seminar was held welcoming Dr. Takatoshi ITO (The University of Tokyo). The seminar was titled "Long-term Economic Development: Lessons of Japan's Experiences to Asia". 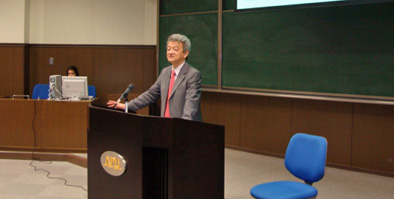 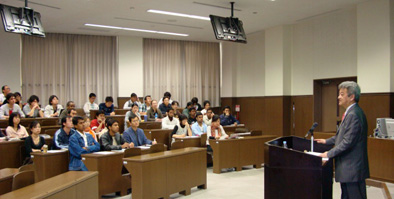 On Monday May 4th, a RCAPS sponsored seminar was held at APU. The seminar welcomed Mr. Takatoshi Ito from the University of Tokyo. His lecture was titled,"Long Term Economic Development". About 80 students and faculty attended the seminar.

Dr. Takatoshi ITO graduated Hitotsubashi University with a major in Economics. After completing a Masters degree at the Graduate School of Economics at Hitotsubashi University, he graduated Harvard University with a PhD from the Graduate School of Economics. He has worked extensively in the United States and in Japan, at Minnesota University, Hitotsubashi University, and at the University of Tokyo where in 2004 he assumed the position of professor at the Graduate School of Public Policy which he holds till present. In the meantime, he has resided at Harvard Kennedy School of Government as a visiting professor, served as Senior Advisor in the Research Department of the International Monetary Fund (IMF), and as Deputy Vice Minister for International Affairs at the Ministry of Finance, Japan. In 2004 he was President of the Japanese Economic Association. In October 2006 to October 2008, he worked as a member Council on Economic and Fiscal Policy.

The lecture discussed economic development from the 1860s to 2000s, focusing on Asia, particularly on Japan. Not only did the lecture focus on economic development, but on the lessons which can be learned from Japan’s experiences to Asia. Professor Ito discussed the growth of Japan from a low-income developing country status to a gold-standard, middle-income status seen in other Asian countries (Korea and China, and other ASEAN countries to a lesser extent), to a second largest economy and the burst of the bubble in the 1990s where Japan fell into prolonged stagnation. Economic difficulties such as banking crisis, depreciation and inflation were discussed and Professor Ito made the comparison with the US today, making it evident these trends were not unique to Japan only.

After the lecture, 15 minutes were allotted for questions. Many questions were asked, a few concerning the current economic situation and the possible measures that could be taken and concerning also, what course the economy may take in the near future.