On Wednesday November 26, a RCAPS sponsored seminar was held at APU. 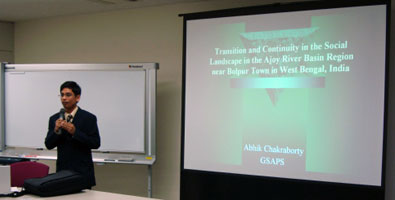 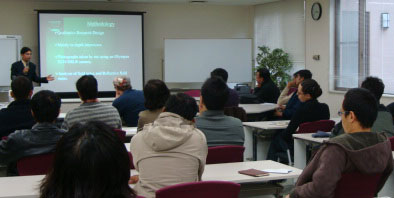 Transition and Continuity in the Social Landscape in the Ajoy River Basin Region near Bolpur Town in West Bengal, India The Bengal basin, formed by geomorphic processes carried out by three mighty rivers of the Indian subcontinent, is home to 60 percent of the freshwater resources in India. Recently, it has seen a grave threat emerge from the impact of rapid industrialization and urbanization, threatening to jeopardize the rich ecosystems and sociocultural variation in this area. The region is crisscrossed by many tributaries of the river Bhagirathi Hooghly and Ajoy is one of the main rivers in this area.
This research, by analyzing the continuity and transformation in the social landscape in the Ajoy River basin, explores issues like the relationship between the river and bank dwellers, how the bank dwellers perceive the anthropogenic changes in the river regime, and to what extent are they involved in these changes. It argues that natural events such as floods have a social dimension, which makes them socially constructed phenomena at the same time. The findings indicate that ‘flood’ is a complex and dynamic entity of natural, socioeconomic and sociopolitical components. As the river has shifted its course, floods have devastated bank-dwelling communities repeatedly. In addition, a lack of information about the river’s characteristics has led to dangerous ignorance on the part of the people engaged in construction activities and bank-dweller communities increasingly dependent on the urban centers for their incomes.
The research concludes that the twin processes of urbanization and globalization are the main drivers of change in the local landscape, and the bank dwelling communities have little say in such changes taking place around them but are forced to cope with them due to their marginalized existence. Urban expansion in the river basin has disentitled these communities dependent on the river by removing their control over its water resources. The case of this river basin points to a fundamental change in the man-nature relationship, and a loss of indigenous knowledge or cultural diversity, which used to be extremely rich in historical times.