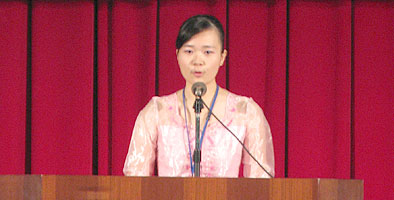 Mr. CHAE spoke of his gratitude at winning 1st Prize: "Preparing my speech was a lot of fun and I had a lot of support. I was able to win thanks to the advice from my friend and Japanese teacher, Part-time lecturer Ms. WATANABE Wakana. She would stay behind with me after Japanese class and help me with my preparation. I feel truly thankful."

Excellence Award winner Mr. CHOMICIUS spoke of his future ambitions: "I am glad to have been able to participate in this speech contest. Though, I wish I hadn't been so nervous and made such a mess of the start. If I ever get the opportunity again, I want to do better next time."

This contest has been held every year since 1989 aiming to promote exchange with international students and deepen mutual understanding. This year there was 14 entrants from 7 universities, junior colleges and technical colleges within the prefecture and they gave speeches on subjects such as their dreams and interactions with the local people. Many locals came along to the contest and were impressed with the international students' Japanese. Some even commented that "their Japanese was better than Japanese people". 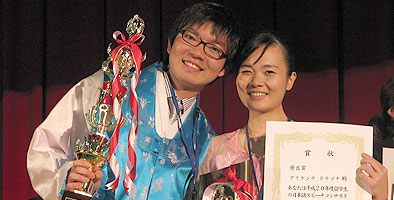