From Monday, March 23 until Sunday 29, 2009, fourteen members of the APU Student Circle XIAO visited Baiyun Primary School, China, and held a sports day.This sports day was planned by members of XIAO who heard about the Japan Yúnnán Rengi Friendship Associations aid work in building primary schools in Yúnnán Province –an area where there are many minorities and few opportunities to receive schooling.

The Baiyun Primary School, which has a roll of approximately 400 students (including kindergarten students), was rebuilt by the Japan Yúnnán Rengi Friendship Association and is situated in Red River Village in Yúnnán Province.

Members of XIAO spent 2 days at the school playing paper, scissors, rock games and gesture games with the kindergarten and younger students. With the senior students they guided them through a three-legged race relay and held a sports day.

The senior students especially appeared to enjoy the red team vs. white team three-legged race relay. The whole school cheered them along, yelling "jiayou, jiayou" (go! go!) as they ran as fast as they could.

Looking back on their visit, XIAO representative HIRATA Karin (APM4, Japan) spoke of her impressions.

"It was difficult to communicate our intentions due to the local Yúnnán Province dialect. However, we were able to make friends with the children and they cheered us up with their innocence and frankness. In the future I hope to deliver lessons and aid to them in addition to the sports day so that they can continue to have the opportunity to receive schooling." 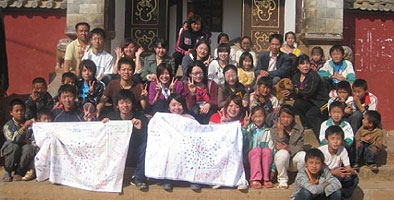