APU will mark its 10th anniversary on April 1, 2010.
APU has built up as a new model of international society with the support of a range of sources such as Oita Prefecture and Beppu City region, former heads of state and ambassadors from countries around the world, Japanese economic and manufacturing leaders and many alumni and parents.

Therefore, the 12 months between Fall, 2009, and Fall 2010 have been set aside to celebrate this occasion and a range of commemorative events will be held as a way of expressing our thanks for the last 10 years. APU hopes to reaffirm just how much it can contribute to international society as a new model example of an internationalized higher educational institution.

We plan to continue to introduce 10th Anniversary initiatives on the APU official homepage. We first would like to introduce the recently published "The Story of the Birth of APU". 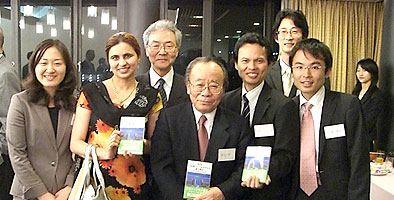 "APU Story - The Birth of Japan's "Global Cooperative" University" focuses on the first steps made towards the establishment of APU beginning in 1994 up until the opening of the university in April, 2000. It also centers on the opening stages when the 1st and 2nd groups of students were working towards the realization of their dreams while they overcame difficulties.

The book introduces in detail episodes through the years such in Chapter 1 "The Egg borne of a Dream" which looks at the patchwork of episodes which lead to the opening of APU such as the questionnaire about the establishment of a new university which arrived at Ritsumeikan Trust as it was fumbling about with the creation of a "universally applicable university" from Oita Prefecture which regarded the luring of a university "important to increasing young residents". Chapter 2 "The Challenges" throws the spotlight on the challenges faced in creating a multicultural environment such as the securing of international students, the realization of a Japanese/English bilingual campus and the creation of an academic concept.

The Story of the Birth of APU Editorial Committee compiled of Ritsumeikan Trust faculty members, gathered comments from a range of people involved in the creation of APU including Former Governor of Oita Prefecture HIRAMATSU Morihiko, Former Mayor of Beppu City INOUE Nobuyuki, the first President of APU, SAKAMOTO Kazuichi, graduates and local citizens.

At the party, President CASSIM gave a few words of gratitude, "This party today is being held to express our thanks to everyone who cooperated in the gathering of information for the publication of The Story of the Birth of APU. This book speaks of the 'aspirations behind the conception of APU and the kind of effort put in by everyone to get the university open'. It also shows us just how much support we received and of the 'passion of the 1st group of students'. I feel that it is our duty to return to that starting point and reaffirm these building blocks of the university."

There are currently 2815 international students from 87 countries and regions and 3153 domestic students building up the multicultural APU campus and working hard in their studies with the support of the people of the local community. APU will continue to be rich in creativity and humanism, have strong leadership and endeavor to nurture the excellent human resources who can get involved in the solving of the various issues facing humanity in the 21st century.

"The Story of the Birth of APU building the World's Cooperative Learning University" is published by CHUOKORON-SHINSHA, INC, is 256 pages long and is on sale for 1208yen (currently only available in Japanese. An English translation planned for publication).
Please click here for more details. 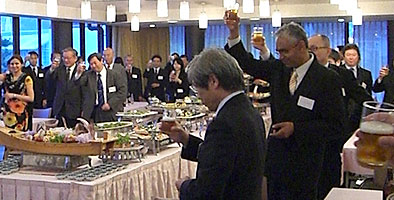