From Saturday, May 9 until Sunday 10, 2009, forty AP House residents including international students from 13 countries and regions, visited Nagasaki and exchanged with high school students participating in the "10,000 High School Students Signatures Campaign" aiming for world peace and the abolition of nuclear weapons. 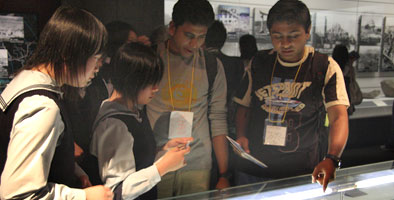 Studying with high school students at the Atomic Bomb Museum

Every year in the Autumn Semester APU holds Kyoto Peace Tours with Ritsumeikan University. However, this peace exchange tour was jointly held by APU and the "10,000 High School Students Signatures Campaign" high school student executive committee as an independent APU peace study program. This tour was attempted for the first time and aimed to let the students learn about Japanese history and peace in Nagasaki through touring the city once destroyed by atomic attack and littered with atomic legacies.

On the 9th, the second day of the tour, the group visited sites with a deep connection with to the atomic bomb such as The Nagasaki Peace Park and Nagasaki Atomic Bomb Museum with the high school children participating in the "10,000 High School Students Signatures Campaign". The participants viewed priceless photographs and materials which were under the atomic blast and spoke with people who experienced the atomic attack. It proved to be an opportunity to consider the tragedy of war. 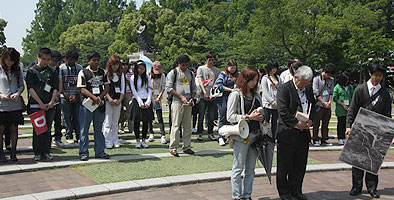 Giving a silent prayer for the victims

A survivor of the bombing, Mr. HIROSE Masahito (79), used English as he spoke about his terrible experience to the participants from his experience as an English tutor. One of the participants asked, "What can we do for world peace?" to which Mr. HIROSE replied and made an appeal for the abolition of nuclear weapons, "my generation has a responsibility for engaging in wars, but today's generation has a responsibility to maintain a peaceful world which doesn't use nuclear weapons."

On the 10th, the students exchanged opinions based on what the saw the previous day. Everyone reaffirmed their understanding of the importance of peace and took part in the voluntary petition for signatures appealing for the abolition of nuclear weapons. One of the students who participated in the signature campaign spoke of their impressions, "Perceptions of war and peace depend on the individual and country. However, I think that it is very meaningful that students from 13 countries including nations which possess nuclear weapons such as America and China appealed for the importance of peace and participated in the signature petition."

The high school students who participated in the "10,000 High School Students Signatures Campaign have been invited to APU on Monday/public holiday, July 20, and plan to petition for signatures on the APU Campus with the students who participated in this Peace Tour. APU will continue to provide opportunities for our international students to learn about Japanese culture and history. 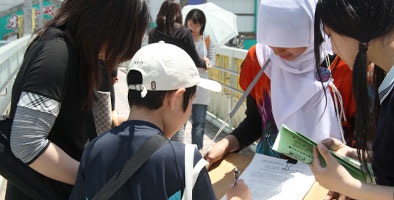