On Friday, May 8, 2009, The New Zealand Ambassador to Japan, His Excellency Mr. Ian KENNEDY visited APU and sat down for a discussion with Vice-President Malcolm COOPER.
H.E. Mr. KENNEDY is an Ambassador member of the APU "Advisory Committee" support organisation. Mr. KENNEDY, who visited Oita Prefecture to attend the celebration held in commemoration of the decoration of the Oita Prefecture-New Zealand Friendship Association Chairman, visited APU with the former Mayor of Rotorua.

During his discussion with Vice President COOPER's, H.E. Mr. KENNEDY showed a great deal of interest in APU's Japanese-English bilingual education, dual-degrees and education programs for members of the community etc. The two went on to discuss the possibility of APU accepting American school students in Tokyo etc.

Furthermore, during their conversation, it was confirmed that both parties would further their discussions regarding educational exchange etc., based on future APU-New Zealand friendship.

There are currently 20 students from the Oceania region studying at APU including 1 student from New Zealand (as of May 1, 2009). Furthermore, APU's home city of Beppu has concluded a sister city agreement with Rotorua, New Zealand. We can look forward to further fruitful relations between APU and New Zealand in the future. 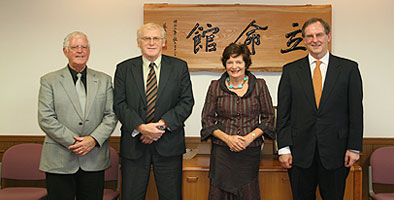