Consuming Cultures: Change, Tradition and Choice in Asia and the Pacific

The United Nations University (UNU) Global Seminars are held annually in Japan and abroad in order to raise awareness and enhance understanding of contemporary global issues and the role of the United Nations.

From May 18-21, APU President, Monte CASSIM and four APU students traveled to the UNU Global Seminar in Honolulu, Hawaii; and had the opportunity to interact with student delegates and young professionals from all around the world, and with scholars and experts working in the UN's global networks. The Seminars were cohosted by the United Nations University and the School of Hawaiian, Asian and Pacific Studies at the University of Hawaii at Manoa.

Spotlight talks with the APU student delegates and finds out about their involvement at the international conference first-hand. 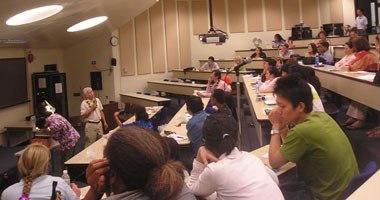 53 delegates from 18 universities took part in the conference at the University of Hawaii in Manoa, exploring the theme of Consuming Cultures: Change, Tradition and Choice in Asia and the Pacific. A lecture was held on consuming cultures and drew on hip hop music and online games as well as on urbanization in China. "Loco Moco" was raised as an example of a consuming culture that has risen from the immigrant population residing in Hawaii. It is a type of fast food or mixture of cuisines from many Pacific rim countries, with a special Hawaiian twist and is particularly popular among the youth residing in Hawaii.

APU President, Monte Cassim delivered the keynote address, and over the four days, sessions were carried out by academics from all over the world; and group sessions and fieldwork provided opportunities for students to explore the theme in detail. Delegates were randomly divided into five groups and required to carry out a fieldwork and presentation on Waikiki Beach.

JO Yong-Su's (APM2, South Korea) team carried out fieldwork on the topic of Sustainable Development of Waikiki Beach. Even though it is a man-made beach it is always filled with tourists commented JO. It's a prime example of a consuming culture where tourists pay to spend time in the sun despite it being artificial. 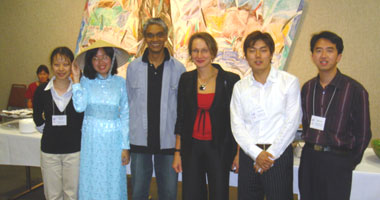 JO described the conference as "challenging" and a unique opportunity to study topical issues alongside other students residing in the Asia Pacific. He said it was also particularly interesting to learn more about the Polynesian culture during the conference. Before the conference, JO said he thought "consuming culture" only referred to things of an economic nature (such as money and property), but came to the realization that it encompasses all types of consumption in connection with our lives.

LE Yen (GSA - ICP1, Vietnam) said the conference was an ideal opportunity to network. "I learnt directly from my fellow group members and also from the conversations I had with professionals over lunch. It was an "unforgettable" experience."

"Rewarding" would be a fitting word to describe the conference said LUO Quan, a first-year GSA - ISP student from China. "I not only learnt from the lectures but from the interaction with other students. It was nice to be able to brainstorm ideas and look at the issues from a different perspective."

TRAN Phuong (APM4, Vietnam) said that she found the experience "amazing". "I appreciated the opportunity to meet such an interesting cross-section of people and hope to use the contacts in the future."

The next UNU global seminar will be held in Jeju, Republic of Korea from July 14-18, 2005 and the theme will revolve around – The Vision of a Peaceful and Sustainable Future.