On Wednesday, July 22, 2009, eleven first term participants due to complete in September 2009 the Ministry of Economy, Trade and Industry and Ministry of Education, Culture, Sports, Science and Technology commissioned Global Business Leaders Development Program (GBLP) held a research presentation and announced the results of what they have leant through the GBLP. 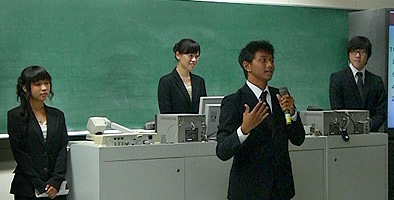 The Global Business Leaders Development Program (GBLP) was proposed to, and adopted by, the government promoted international student support program "Career Development Program for Foreign Students from Asia". The program, now in its 4th year, recruits high level Asian students with a desire to seek employment in Japanese industry and aims to nurture the human recourses with the ability to lead the development of the Japanese economy. During their 3rd and 4th years, students accepted into the program must study a separate GBLP curriculum (16 credits) which includes learning and internships in addition to the usual APU curriculum.

The research presentation groups were divided into two, each with their own theme of "Multinational Japanese Industries" and "The Unseen Effects of Job Seeking Difficulties for Foreigners" and delivered presentations on the difficulties faced by foreigners working in Japanese industries when they seek employment or change jobs. One group suggested that a reason for these difficulties lies in the differing values systems of Japan and other countries and concluded that to improve the situation, companies must endeavor to create an environment in which there is a mutual understanding of differing value systems and that company employees must work towards understanding the company’s corporate culture. The other group analyzed the results of an investigation of 100 current and graduate APU students which showed that a reason for international students retiring from their job within 5 years was the cost associated with living in Japan such as marriage, maternity, child care and medical costs and that they have to take care of their parents in their home countries. This left a new impression on the faculty and students who attended. 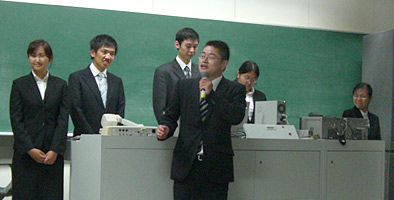 At the question and answer session at the conclusion of the presentations, Vice-President YAKUSHIJI posed the question, "What kind of careers do you want to form?" The students each held their own vision for their future career such as, "to set up a branch in Japan for a company of my home country" and "to get a job in Japanese company in my home country". However, all respondents held the common view of "becoming a bridge between Japan and my home country".

Taufan Hadi P. (APM4, Indonesia), a first term GBLP student who plans to start work at FUJITSU when she graduates in September 2009, spoke of her ambitions for the future, "I was able to learn in greater depth about business and improve my Japanese though the separate GBLP curriculum. In the future I hope to become a bridge that can link the Asia region with Japanese industries and will continue to work towards becoming an important human resource for Japanese industries in my home country of Indonesia." 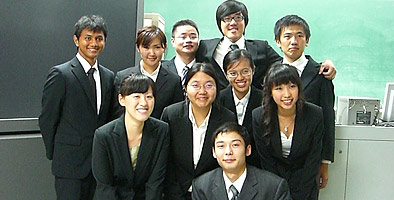