On Monday, December 14, 2009 President Monte Cassim was named a Beppu ONSEN Tourism Ambassador by Beppu City in a ceremony held at City Hall. 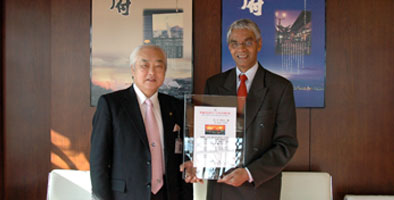 Beppu ONSEN Tourism Ambassadors are designated by the city to promote Beppu tourism. President Cassim was commended for his contribution to the internationalization and revitalization of Beppu by way of university-level education. Since he will return to Kyoto in January to serve as Vice Chancellor of the Ritsumeikan Trust, the city granted him the title of Ambassador with great expectations for him to contribute to the promotion of Beppu tourism.

At the ceremony, President Cassim received a certificate of designation from Mayor Hamada Hiroshi and was presented with flower holder made from bamboo, a traditional handicraft of Beppu. President Cassim is the 17th person to be named Beppu ONSEN Tourism Ambassador and only the 2nd foreigner to receive the designation.

President Cassim came to APUY in 2004 as the university's 2nd president. He served 2 terms (6 years) and is scheduled to finish his duties on December 31st. On January 1st, 2010 he will become a Vice Chancellor of the Ritsumeikan Trust, a position in which he will strive to further internationalize the Trust and Japan. 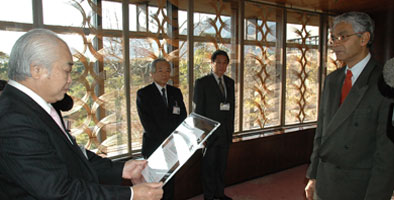