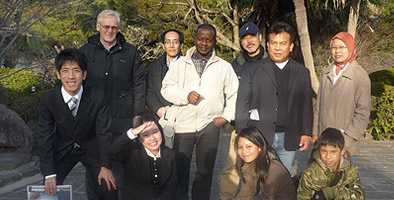 The UN party came to Japan to speak at the Japan Tourism Agency hosted "Promoting International Tourism Exchange through Youth Tourism" seminar held on Sunday 30 and requested Mr. NAKAMURA to guide them around the sights and sounds of Beppu.

The group enjoyed a tour of the Kannawa onsen district including Hyotan Onsen (awarded three stars by the Michelin Guide), the old-Fujiya Inn (a 107 year old wooden structure and registered tangible cultural property), and many more tourist hot-spots.
University Malaysia Terengganu, Assistant to the President, Mr. Yahaya Ibrahim commented on the tour, "I was surprised with the Japanese-style bamboo spring water cooling devices we saw at the onsen facilities. We could really feel the essence of Japan in the old-style Japanese cobblestones. The love our guide Mr. NAKAMURA has for Beppu and onsen really came across in his tour.

In May, 2009, Mr. NAKAMURA became a guide for the "Takegawara Iwai Backstreet Course" – one of the tour routes on the Beppu Hatto Kataribenokai backed "Beppu Hatto Walks"* – and has since been introducing the charms of Beppu to tourists while balancing his time as both a volunteer guide and university student. In addition to this, he is also involved in the development of tourist courses around Beppu's mountainous areas, which he also guides, with the other members of his student club.

Mr. NAKAMURA commented as he looked back on the tour, "I tried to impress on my customers a message of just how great Beppu hot spring are as a representative of APU students and Beppu City citizens. I had to speak in English and was very relieved to get my message across."

Mr. NAKAMURA aims to be a multilingual guide and is currently studying Vietnamese and Korean in the hope of introducing even more tourists to the charms of Beppu.

* The Beppu Hatto Walks
With the help of local guides, the Beppu Hatto Walks take people around the backstreets and places of scenic beauty in Beppu City. This volunteer project aims to rediscover Beppu City's forgotten tourist treasures put them to good use in urban development initiatives. Begun in 1999 with the "Takegawara Iwai Backstreet Course", the number of routes has expanded throughout Beppu City. The Beppu Hatto Council was established in 2003 and received the "Minister of Land, Infrastructure and Transportation Urban development Award" in 2008.