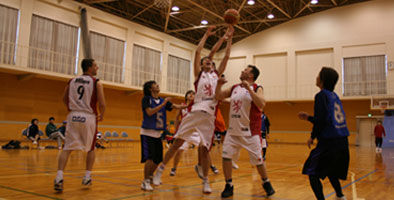 The first game saw the "Dolphins" take on the "Old Boys" in a closely fought match with calls from the benches, team captains, and coaches in Japanese, Czech and English. The lead changed hands more than once in this physical contest which saw the final result go down to the wire. Trailing by 6 points, "Dolphins" player KURODA Naoto (APM1, Japan) attempted a 3-pointer in the dying seconds to narrow the scores but the shot went astray and the gamed ended with the scores at 27-33 to the Czech "Old-Boys". APU exchange student and "Old Boys" captain Michal KAPAVIK (APM, Czech Republic) said, "I have played with the Dolphins before and I know how much work they put into their training. I'm sure that they gave 100%".

A round-robin style then unfolded between the four participating teams. With the Dolphins, Old Boys and Beppu University Basketball all claiming two wins from three, the tournament champion was decided by point's differential.

Looking back on the match, APU Dolphins team captain MATSUOKA Ryota (APM2, Japan) said, "This was our first experience of playing against an overseas team and the match was very physical. This was a great experience for us and we really enjoyed the match. Later this year in May our team will compete in a Kyushu-Okinawa block college basketball tournament in and I hope that our experiences today will provide a stepping stone to further success".

Now in its second year, the APU Cup hosted an overseas team for the first time through the efforts of Mr. MATSUOKA and Mr. KAPAVIK Michal who organized this year's event. Hailing from the City of Havirov in the Czech Republic, the "Old-Boys" is an amateur/social basketball team with players aging from 25 to 49 including doctors, students and engineers.

*The APU Dolphins
Established when the university first opened in 2000. In addition to actively engaging with local high school and university teams in friendly matches, team members have been active as Table Officials (TO) at matches for the local Beppu City pro-baseball team "Oita Heat Devils" since 2008. 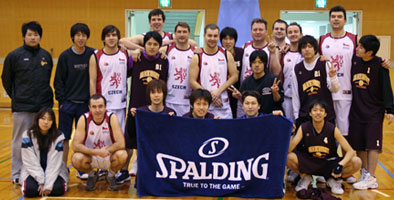